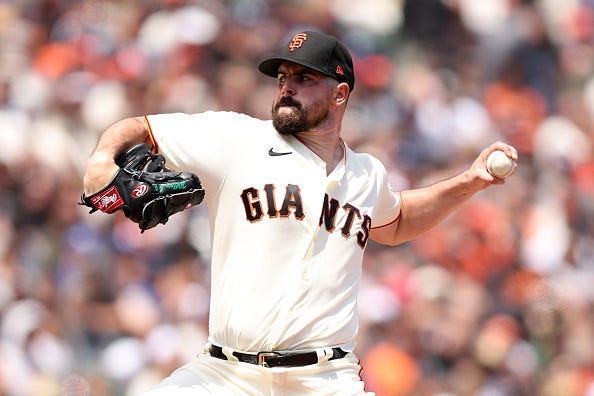 A year after winning a franchise-record 107 games, the San Francisco Giants are 41-40 halfway through the season, having gone 2-8 over their last 10 games. With the addition of the third Wild Card, the Giants are hardly out of the playoff race, but a repeat as National League West Champions feels pretty unlikely.

FanSided MLB Insider Robert Murray wondered this week whether the Giants would consider a minor sell-off if they don't break out of their current tailspin, perhaps one that would include one of the better pitchers in the NL.

"I'm gonna throw out a real oddball one here," Murray said on The Baseball Insiders. "So this is purely a guess, not sourced. But I wonder if the Giants fall out of contention, if Carlos Rodón becomes available. He is signed to a multi-year contract, and he is 19 innings away from being able to opt out after this season. And you have to imagine he's going to pitch 19 more innings. And if they fall out of it, they can trade him and try to restock that farm system by adding some younger pieces. And he would instantly become one of the top two arms on the market.
"[Giants' president of baseball operations] Farhan Zaidi works in some different ways. I wonder if that's a possibility. I floated that idea to an executive last night, just to make sure I wasn't imagining things. And his response simply was 'I hope you're right.'"

Despite finishing fifth in American League Cy Young Award voting in 2021, the Chicago White Sox allowed Rodón to test free agency this past offseason. Because of injury concerns, the lefty lingered before eventually accepting a two-year/$44 million contract offer from the Giants.

Zaidi's decision to sign Rodón has proven to be one of the best moves of the offseason, as the 29-year-old has a 2.87 ERA, 2.24 FIP and 3.2 fWAR through 16 starts, putting him very much in the discussion to be an All-Star for the second consecutive year.

It's entirely possible that Gabe Kapler's Giants will rally and end up making an addition at the trade deadline, rather than selling. But if they were to sell, as Murray said, Rodón would be coveted. He's closing in on the 110 inning threshold he needs to hit to have a chance to opt out of the $22.5 million he's due in 2023 and return to the free-agent market this winter. That would make him arguably the top rental addition any contender could make in advance of the Aug. 2 trade deadline.