Atlanta Braves relief pitcher Tyler Matzek was a crucial cog during the team's World Series run, but apparently has a little ways to go before he's a recognizable face in Georgia.

During the team's World Series victory parade Friday afternoon, a police officer mistook Matzek for a fan who had crashed the parade route, and was seemingly prepared to handcuff him:

When the cops try to arrest @TylerMatzek at his own parade💀 pic.twitter.com/9mwy0i9lBz

Fortunately, a longer video shows that the cop was eventually told who Matzek was, and the 31-year-old reliever was allowed to continue on in the parade:

In 13 games for the Braves this postseason, Matzek picked up three victories and posted a 1.72 ERA. 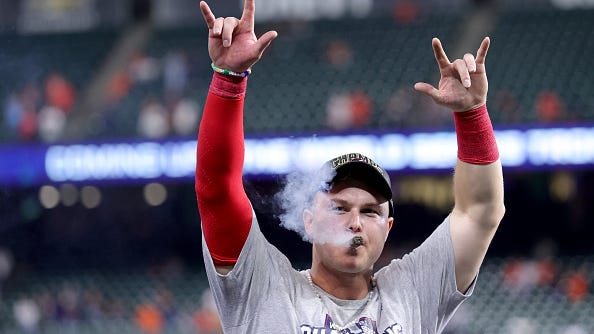 Joc Pederson at World Series parade: 'We are those mother—––'