With Los Angeles Angels owner Arte Moreno set to sell the team, the debate that won’t die has been reignited: should the Philadelphia Phillies try to acquire Mike Trout?

Alex Carr of Inside The Phillies penned an interesting piece Tuesday wondering if Trout could try to engineer a trade to Philadelphia this offseason. First of all, we're not necessarily sure that the Millville, NJ native would view the Phillies as a more attractive landing spot than either team in New York. Secondly, it is fair to wonder given both the construction of their roster and where Trout is in his career if it would make sense for the Phillies to be players for the three-time American League MVP.

The problem is, an uncommon back problem called costovertebral dysfunction cost Trout more than a month's worth of games. While the back injury doesn't seem as grave as it initially did, it is still something that he's likely to have to manage for the remainder of his playing days.

This back injury comes a season after a torn right calf muscle limited Trout to just 36 games in 2021. For someone under contract through the 2030 season at over $35 million per season, it's unquestionably concerning that injuries have cost Trout sizable chunks of consecutive seasons.

Trout's defensive metrics -- four outs above average, one defensive run saved -- have bounced back in center field this season after declining for a few years in a row. But while Trout squashed the idea of moving to a corner outfield position that would put less stress on his body before the 2022 season, he may not be far away from being a left or right fielder.

The 10-time All-Star is such a great player that he'd still have tremendous value in a corner outfield position, even if his peak value is as a center fielder. The Phillies don't exactly have openings in the corner outfield, though.

A UCL tear may force Bryce Harper to DH for the foreseeable future, but there's no evidence that he won't return to being the every day right fielder whenever his elbow is healthy. Harper is under contract through the 2031 season.

Kyle Schwarber has been an All-Star in his first season with the Phillies, and is under contract through 2025. Schwarber has -6 defensive runs saved and -7 outs above average in 2022, so it's not as though you would be against moving him to another position in theory.

However, DH will be occupied for quite a while. In the short-term, Harper can't play in the field. In the long-term, Nick Castellanos has graded out even worse than Schwarber defensively. While he's been hot of late, Dave Dombrowski would have his work cut out trying to trade Castellanos this offseason considering he's owed $80 million over the next four seasons.

Schwarber has some very limited experience at first base, and perhaps that will be a long-term landing spot for him. 2023 is the final year of arbitration eligibility for Hoskins. Whether it's to accommodate Schwarber or Alec Bohm moving to first base, the Phillies might not give Hoskins a contract extension. Still, that won't be an easy decision. Hoskins isn't without his flaws, but he is going to hit at least 30 home runs and walked 75+ times in 2022. That's not going to be easy offensive production to replace. Neither will his leadership presence in the clubhouse.

When asked about the idea of trading for a "generational talent" before the trade deadline -- Juan Soto was the name on everyone's mind at that point -- Dombrowski didn't seem to think that's necessarily what the Phillies needed to return to the postseason.

"We have some generational talents with us over here," Dombrowski said. "I don't know that we're swimming in that market. I love star players, I always have. I have acquired a lot of them. I know [managing partner] John Middleton likes that. But we do have some star players. I think one of the problems that we've had more so is the depth of talent in our organization. So to strip the depth of our talent to add a generational talent, whomever you may be talking about, I don't know that is where we sit at this point."

It's hard to put the pressure on any prospect of being someone that you wouldn't trade for Trout, one of the greatest players in MLB history. But Dombrowski isn't bluffing in how high he and the Phillies are on Andrew Painter, Mick Abel and Griff McGarry, the top three prospects in the organization. At some point, you have to start developing some stars from within. All three are at Double-A, and any combination of them could factor into the 2023 season. You'd likely be asked to part with some or all of those three, Bryson Stott and perhaps more to land Trout. That's in addition to taking on the $283.6 million that he's owed after this season.

When the Angels visited Citizens Bank Park in early June, you got a glimpse into what could have been. A local superstar that seemingly grew up rooting for Chase Utley, Ryan Howard and Jimmy Rollins patrolling the outfield with a section of kids from Millville cheering on their idol every single night. If there had been a realistic path to acquiring Trout five years ago, the Phillies almost certainly would have jumped at it. But some stories are just too good to be true. 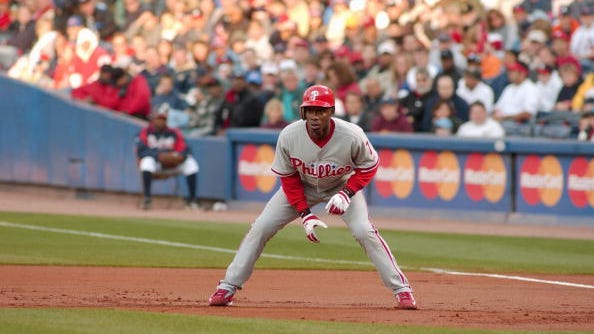