Zion Williamson is gearing up to have a huge year this season after missing the entire 2021-22 campaign with a foot injury.

Although the Pelicans star forward is fully healthy -- with a new long-term contract extension to boot, Williamson recalled what his mindstate was last season in an interview with Tres Dean of GQ, revealing how he dealt with the "hate and pain" from a lot of fans due to his injury.

“It’s been a lot. I can sit here and explain it, but nobody will really be able to feel it the way I did," Williamson said. "My foot was broken and I couldn’t magically heal it. It hurt, because I love the game of basketball. But because of it I was experiencing hate and pain from people I don’t know every day, and it started to wear on me.”

Zion then compares his career arch to that of his favorite anime character Naruto.

"For a while nobody took Naruto seriously,” he told GQ. “And then he went and trained with [Master Shinobi] Jiraiya for three years, right? And he came back at 16 years old, goated."

“Sure enough, I’m 16 years old and suddenly all of the attention starts coming. I remember thinking, Yo, that’s crazy. That’s exactly when it happened for Naruto, and it’s when it’s happening for me.”

There is no doubt that Zion experienced a lot of criticism from both the media and NBA fans last season. People mainly got on the former No. 1 overall pick about his weight, a topic that is still an issue for fans of the superstar.

In fact, it's such an issue that the Pelicans added a "weight clause" to his five-year, $193 million max contract extension with the potential of losing guaranteed money if he fails to meet those expectations.

Without the impact of Willamson on the floor, the Pelicans still managed to make the playoffs under the leadership of Brandon Ingram and the late addition of C.J. McCollum, providing some much-needed offense.

There is no doubt that the Pelicans have surrounded Williamson wth a team that is looking to shake up the pecking order in the Western Conference. H 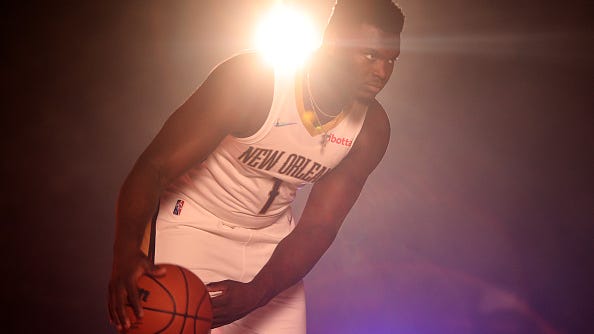