Thousands and thousands of seniors, teachers, essential workers and more who are desperate to get the coronavirus vaccine are finding the same thing amid a confusing mix of county health departments, hospital systems and pharmacies -- demand is high and appointments are few.

Michigan's Macomb County Executive Mark Hackel announced this week the county had 300,000 people eligible to get the coronavirus vaccine -- and 4,000 doses on hand. And here's a new struggle: 12,000 doses headed to Michigan were spoiled on their way to the Mitten State. It happened Jan. 17.

Temperatures control issues on the delivery truck are to blame, officials said. Freep.com reported nearly 12,000 doses of the Moderna vaccine had gotten too cold during shipment and had to be tossed out.

"Recently we were made aware that a number of Moderna vaccines that were shipped to Michigan were not kept at the appropriate temperature and thus we couldn't use them," Gov. Gretchen Whitmer announced at a press conference. "That frustrates me when I know we are in a race and every vaccine matters. But that's not something that I could control; it's not the state of Michigan's fault. ... I'm certain that people who had appointments scheduled at facilities that were supposed to get those particular shots were frustrated because they weren't able to get them."

Lynn Sutfin, a spokeswoman for the state health department, said no one was injected with spoiled doses of the vaccine, which means safety checks worked. 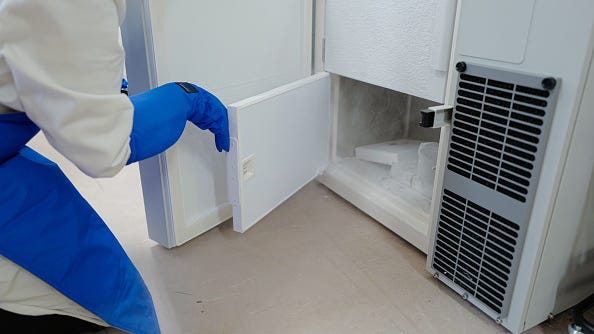 "The truck carrier McKesson is investigating the cause of the temperature disruption and is working to quickly repack additional doses of the vaccine to ship out as a replacement for those that may have been compromised," freep reported.

An additional six shipments were held back for inspection to ensure their safety, which may delay some scheduled vaccinations, officials said.