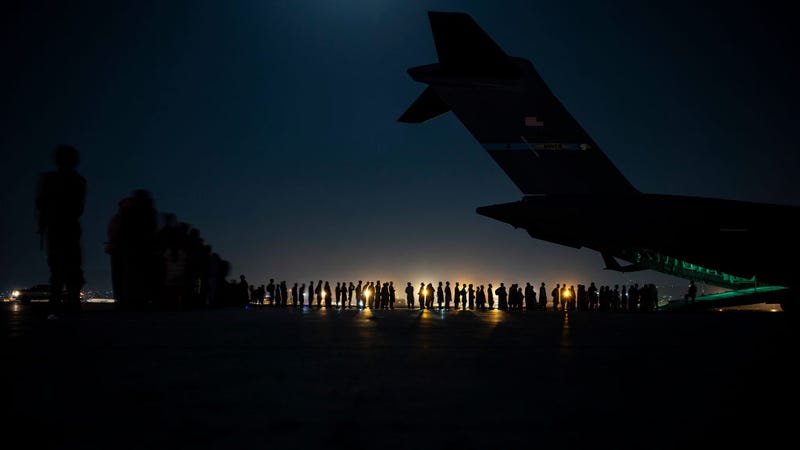 In this handout provided by the U.S. Air Force, an air crew prepares to load evacuees aboard a C-17 Globemaster III aircraft in support of the Afghanistan evacuation at Hamid Karzai International Airport on August 21, 2021 in Kabul, Afghanistan. (Photo by Taylor Crul/U.S. Air Force via Getty Images) Photo credit Getty Images
By Lauren Barry, WWJ Newsradio 950

Following an attack at Kabul airport this week, two “high-profile” Islamic State militants were killed during a U.S. drone strike in Afghanistan, Pentagon officials said Saturday, according to the Washington Post.

After a terrorist group known as Islamic State-Khorasan or ISIS-K – the Islamic State’s Afghanistan chapter – claimed responsibility for the bombings, President Joe Biden told the extremists that U.S. forces would “hunt you down and make you pay,” said the Washington Post.

Maj. Gen. Hank Taylor, a senior U.S. military official, described the two Islamic State terrorists killed as “facilitators” and “planners,” though he declined to say whether they were involved in the attack.

“We’re not going to go into that,” he said, according to the Washington Post.

Navy Capt. Bill Urban, a U.S. military spokesman, said the target was “an ISIS-K planner,” but did not say whether the person played a role in organizing or carrying out the airport attack.

The Taliban, a fundamentalist Islamic group that took over Afghanistan earlier this month as the U.S. completed plans to remove troops from the country following nearly 20 years of occupation, announced Saturday that it had arrested two members of ISIS-K. They did provide any details on whether they were connected to the blast.

In order to evacuate Americans and American allies from the country, the U.S. has been working with the Taliban. The group, which governed Afghanistan before U.S. troops arrived in 2001, is providing security at Kabul airport.

A White House official said the United States has assisted 111,900 people in leaving the country over the past two weeks, including 6,800 since early Friday. U.S. evacuation efforts in Afghanistan are expected to wrap up by Aug. 31.

We're going to do everything that we can to provide safe evacuation for Americans, our Afghan allies, partners, and Afghans who might be targeted because of their association with the United States.

As of Saturday, approximately 350 Americans were still looking to leave Afghanistan, according to a State Department spokesperson quoted by CNN.