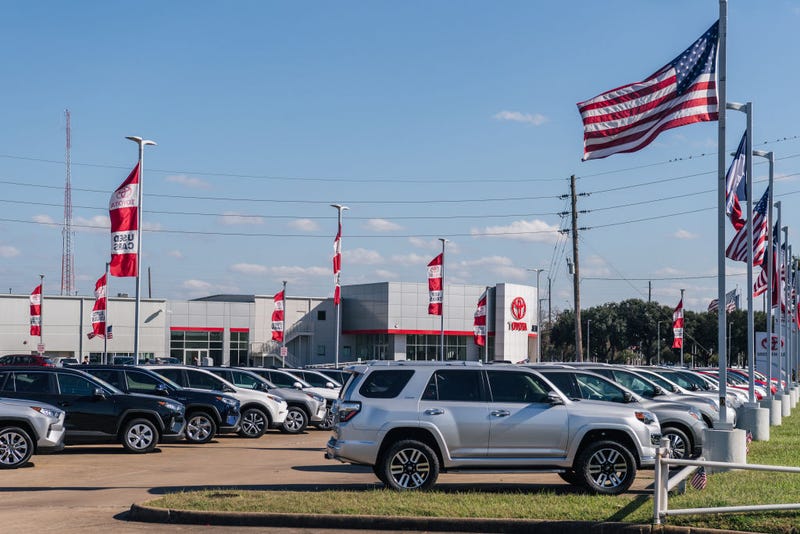 Vehicles sit on the lot at the Joe Myers Toyota dealership on January 04, 2022 in Houston, Texas. Toyota Motor Corp has been ranked the No. 1 automaker in America after surpassing General Motors in auto sales for the first time since 1931. Automakers reported Toyota having sold 2.332 million vehicles in the United States, in 2021, compared to 2.218 million for General Motors. (Photo by Brandon Bell/Getty Images) Photo credit Getty Images
By Lauren Barry, WWJ Newsradio 950

An estimated 89 percent of car buyers are currently paying more than the sticker price, or within 5 percent of it, for vehicles.

“The typical dealership experience that consumers are familiar with – walking dealer lots with rows and rows of cars, negotiating over price and getting many incentives – is not likely to return this year,” said Tyson Jominy, head of data and analytics for data analytics firm J.D.
Power, according to CNBC.

Statista reported last month that the automotive industry faced “various setbacks in 2020” amid the COVID-19 pandemic. In November, The New York Times reported that a slowdown in auto making and subsequent car shortage could put the world’s economy at risk. CNBC said the manufacturing slowdown has improved slightly.

However, an ongoing global shortage of microchips, which are integral components for modern cars, continues to hinder production.

According to the most recent data from Edmunds, an online automotive industry resource, the average transaction price for a new car is $45,872, more than the manufacturer’s suggested retail price of $45,209.

“It’s slightly better in the sense that there is no more drop-off of inventory – it’s not getting any worse,” said Ivan Drury, senior manager of insights for Edmunds.com. “But we’re still talking many months out until it starts looking more normal.”

Jominy said car prices are up, and are likely to stay that way, because around 5 million consumers are waiting to buy them. With high demand, automakers aren’t offering as many incentives to get people into dealerships.

“This pent-up demand will keep inventories low and prices high throughout most of 2022,” Jominy said.

Last month, an estimated 57 percent of cars sold within 10 days of delivery and the average time for a new car to be sold from the lot was 17 days, according to J.D. Power. This record low is less than half of the 49 days it took new cars to move a year prior.

In the largest investment in passenger rail since Amtrak was created, President Biden's Bipartisan Infrastructure Law will help create safe, efficient, and climate-friendly transportation alternatives for people and freight.

“Car prices are too high right now,” the president said in a speech Friday addressing the December jobs report. “There are two solutions: you increase the supply of cars by making more of them, or you reduce demand by making Americans poorer.”

Car prices may be high, but the current auto market isn’t a bust for all consumers. For those who have used cars to trade in, demand is higher than usual, Drury said.

“Shop that trade-in,” he said. “Don’t go off old assumptions about mileage or depreciation, because all that stuff is out the door.”

Interest rates are also low at the moment.

Drury said there are some 0 percent or 0.9 percent financing deals available, depending on make and model. Average interest rates for new-car loans are also under 4 percent, according to Bankrate.