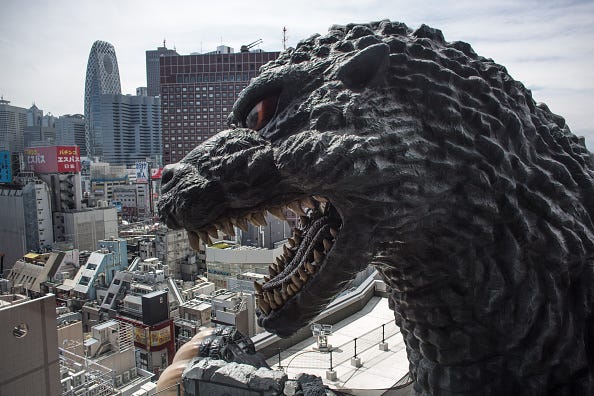 Attention theme park lovers! You are in luck if you love Godzilla!

A Japanese theme park is set to unveil a brand new attraction that will feature a “life-size” replica of the terrifying fictional movie monster, according to CNN.

Next summer, the Nijigen no Mori (Awaji Island Anime Park) theme park, located on Awaji Island near Kobe, will unveil a 65-feet high, 82-feet wide and 180-feet long replica of Godzilla, which is reportedly the actual size of the beast in the movies.

The attraction is being called “Godzilla Interception Operation” and will allow visitors to zipline into the kaiju’s mouth and partake in a shooting gallery aimed directly at the King of the Monsters.

Once it opens it will be the first permanent full-size model of Godzilla. Its geographical location was chosen to keep with the iconic lizard’s cinematic history.

"The legendary figure of Godzilla was first confirmed at the beginning of the Meiji era when a typhoon hit Awaji Island," read a press release for the attraction.

"Godzilla, who appeared with the high waves, roamed the island, causing tremendous damage."

Since making his big screen debut in 1954, there have been over 30 Godzilla films made in Japan and the United States.

The most recent spectacular to hit theaters was this summer’s “Godzilla: King of the Monsters.” Earning over $385 million at the global box office, the film was still considered a disappointment considering its nearly $200 million production budget.