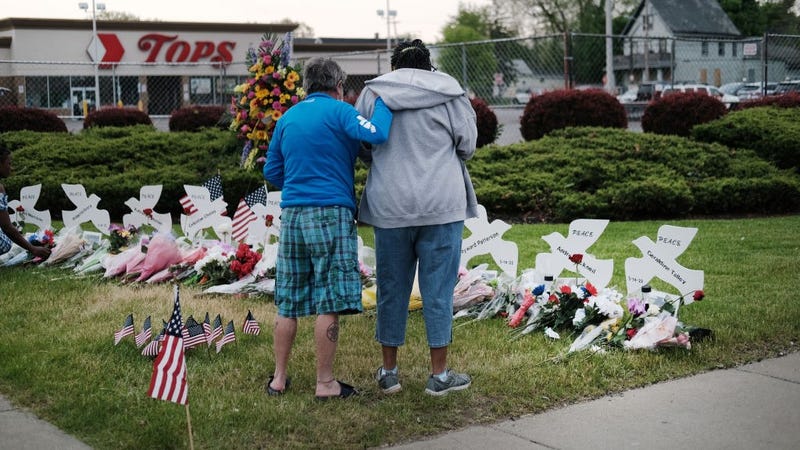 BUFFALO, NEW YORK - MAY 20: People gather at a memorial for the shooting victims outside of Tops market on May 20, 2022 in Buffalo, New York. Photo credit Spencer Platt/Getty Images
By Colin Martin, Audacy

The FBI released a new set of statistics on Monday that showed active shooter incidents increased by more than 50% in 2021 from 2020, reaching a total of 61 incidents across 30 states.

Excluding the shooters, there were 103 people killed and 140 people wounded during active shooter incidents in 2021. In comparison, only 38 people were killed from the incidents in 2020, but 126 were wounded.

An active shooter incident is defined "as one or more individuals actively engaged in killing or attempting to kill people in a populated area," per the FBI.

According to the Centers for Disease Control and Prevention, there were more than 45,000 deaths caused by gunfire in the United States in 2020, per NBC News.

12 of the 61 incidents in 2021 fell under the FBI's "mass killing" definition, which is "three or more killings in a single incident." Only five of the incidents from 2020 fell under that category.

Six incidents occurred in California in 2021, while there were five each in Georgia and Texas, plus four each in Colorado and Florida.

The FBI said that the incidents with the highest number of casualties in 2021 happened at the FedEx Ground Plainfield Operations Center in Indianapolis, Indiana (15 with eight killed and seven wounded) and at Kroger Grocery Store in Collierville, Tennessee (15 with one person killed and 14 wounded).

The most deadly incident occurred at the King Soopers Grocery Store in Boulder, Colorado in March 2021 when 10 people were killed, the FBI report said.

"The FBI remains dedicated to assisting federal, state, local, tribal, and campus law enforcement in its active shooter prevention, response, and recovery efforts, as well as training its international law enforcement partners," the FBI said in the report.

"The FBI remains steadfast in its efforts to train private citizens, as it is imperative that citizens understand the risks faced and the resources available in an active shooter situation."