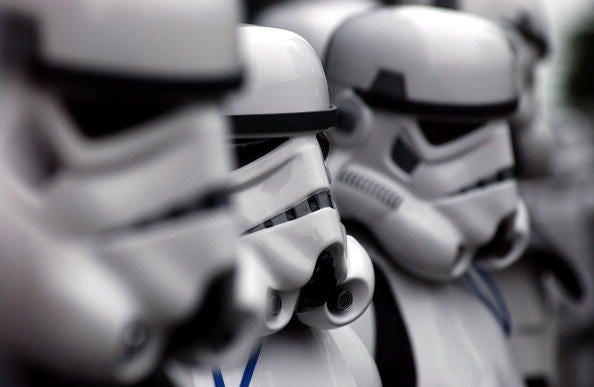 Adidas isn’t making fans travel to a galaxy far, far away for their latest kicks.

On the heels of the release of “The Mandalorian” and its breakout star baby Yoda , the athletic brand is using the force to unveil their new collection of “Star Wars”-inspired footwear, reported “Good Morning America.”

Adidas and Lucasfilm have collaborated on a trio of sneakers in their new “Space Battle” line that are inspired by starships in both the Rebel Alliance and the Galactic Empire.

The three new shoes have been designed to emulate the X-Wing Starfighter, the Millennium Falcon and Death Star via the brand’s popular Ultraboost 19, Ultra boost S&L and Alphaedge 4D styles.

The X-Wing Starfighter-inspired Ultraboost S&L is decked out in grey and orange and reflective glow-in-the-dark accents. To make your inner Skywalker really geek out, it also features the phrases “Stay on Target” and “The Force Will Be With You, Always” on each heel.

The Millennium Falcon is reimagined via the Ultraboost 19 and sports grey and blue hues and metallic elements to give it that “hunk of junk in the galaxy” realness. The words “Jump to Lightspeed” and “Never Tell Me the Odds” are emblazoned on its heels.

Finally, turning to the Dark Side never looked as stylish as the Death Star Alphaedge 4D. Sporting a sleek black veneer with laser green midsole, the shoe included the phrases "That's No Moon" and "The Power of the Dark Side" on the heel tab.

The two Ultraboost sneakers retail for $180, while the Alphaedge 4D will set you back $300. It’s expensive being evil! All three styles are available now at Adidas.com and at select Adidas retailers.

Order them now to make sure they arrive in time to catch “Star Wars: The Rise of Skywalker” on December 20th.