VALLEY PARK, Mo (KMOX) - The Missouri Department of Conservation is hoping the public can help them find who shot a bald eagle that was discovered in Washington County last week. The majestic bird was reportedly euthanized over the weekend due to its injuries.

Authorities say the large eagle was found at the intersection of Highway C and Z in southern Washington County. Conservation Agent Jaymes Hall responded and transported the bird to the World Bird Sanctuary in St. Louis County. 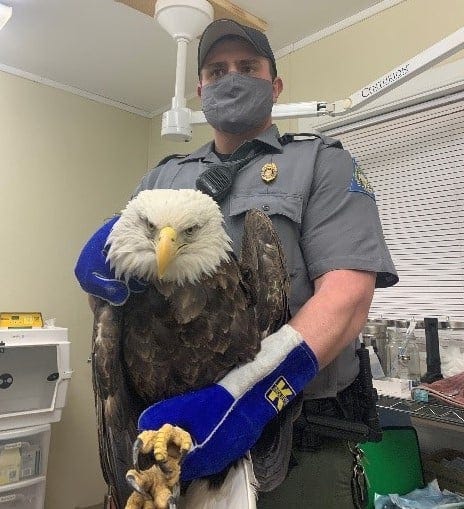 "Upon examination, they discovered two gunshot wounds right through the joint of where the wing connected to the torso. The eagle’s right wing was dislocated and fractured," authorities say.

The sanctuary told the St. Louis Post-Dispatch that it was an impossible task to try and heal the eagle's shoulder after they "found that most of the tissue surrounding that bone was necrotic, it was dead." So the bird was euthanized on Saturday.

Authorities now need help figuring out who shot the bird. The eagle was most likely shot on Feb. 3 or 4, they say. And they ask for anyone with information to contact the Operation Game Thief at 1-800-392-1111.

Shooting a bald eagle is a Federal offense – as well as taking, possessing, transporting, selling, importing, or exporting their nests, eggs and parts of them. Penalties include a maximum of five years and $250,000 fine for felony convictions and a maximum $10,000 fine for civil violations, under the Lacy Act that was passed in 1990.