"When you leave here today, be inspired by what she brought to the table because the entire planet knows this woman's name now. And she's inspired a lot of women and a lot of men to do what's best for them first," Joseph Petito said at Moloney's Holbrook Funeral Home.

Long lines formed outside the Blue Point funeral home for a public memorial service that ran through the afternoon for members of Petito's hometown. The event was live-streamed and drew thousands of viewers.

“She was a beautiful soul; she was full of life, always smiling,” said Desiree Keeffe, a friend of Petito's mother, Nichole Schmidt. “She gave you love. She was just a beautiful soul. She touched everybody like she did now.” 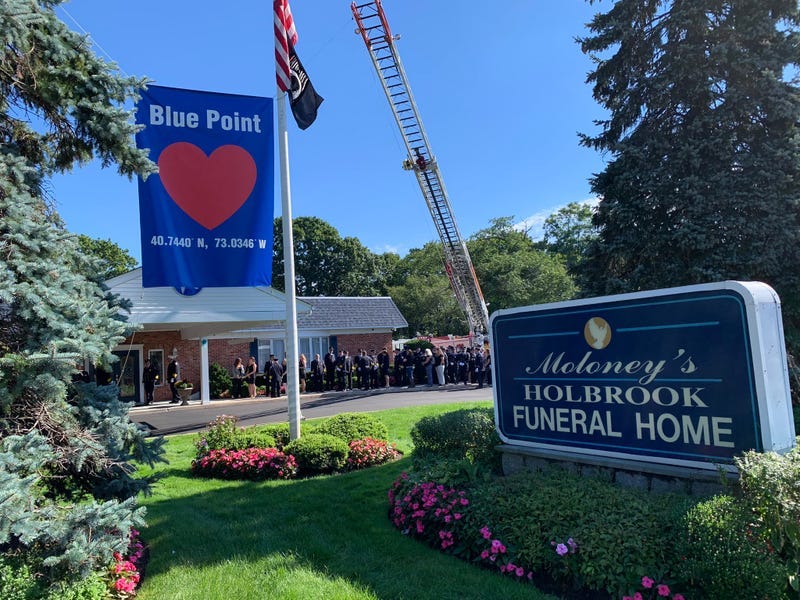 Petito was found dead after she was reported missing during a cross-country trip with her fiancé, Brian Laundrie, earlier this September. Laundrie, who went missing Sept. 14, is now a person of interest in her death and the subject of an intense manhunt.

Petito also made an apparent reference to Laundrie, when giving advice during his euology.

"If there's a relationship that you're in that might not be the best thing for you, leave it now," he said. 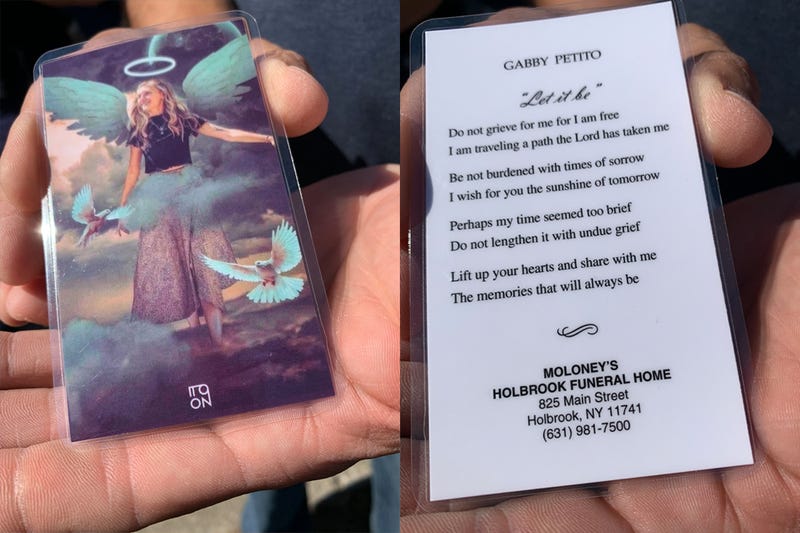 NEW VIDEO. The #FBI entered the #Laundrie house for 3 minutes. According to their attorney: The FBI requested some personal items belonging to #BrianLaundrie to assist them with #DNA matching and Brian’s parents provided the FBI with what they could. (via @BrianEntin) pic.twitter.com/gGelKmFDzk

The FBI was filmed briefly visiting the home of Brian Laundrie's family in North Port, Florida, Sunday to reportedly collect items for DNA matching purposes, according to multiple outlets.

"The FBI requested some personal items belonging to Brian Laundrie to assist them with DNA matching and Brian’s parents provided the FBI with what they could," Steven Bertolino, Laundrie's lawyer, reportedly told Fox News.

Family and friend's touch by Gabby Petito's passing were moved as they saw the signs, flowers and hand-written notes around the funeral home.

"Well, I have three daughters of my own. And this really hit home," said Alene Natale, who made a 2.5-hour drive to be there, noting she could feel the local unity immediately.

Petito's stepfather, James Schmidt, said her life should serve as an example for all.

"Love and give love to all. Like she did," Schmidt said.

Ahead of the service, Petito’s father, Joseph Petito, announced that he was launching the Gabby Petito Foundation to help direct assistance to find missing persons.

"No one should have to find their child on their own," he wrote on his social media accounts. "We are creating this foundation to give resources and guidance on bringing their children home. We are looking to help people in similar situations as Gabby."

The Gabby Petito Foundation. No one should have to find their child on their own. We are creating this foundation to give resources and guidance on bringing their children home. We are looking to help people in similar situations as Gabby. #gabbypetito https://t.co/oaX4BsPcYj pic.twitter.com/I9tz5q6Hcc

Petito’s fiancé, Brian Laundrie, remains missing and a person of interest in her death. The FBI has issued an arrest warrant for Laundrie’s arrest as authorities continue searching a reserve in North Port, Florida, where his family belies he visited before going missing.

Several private entities have offered tens of thousands of dollars in rewards for information that leads to Laundrie’s arrest, according to local reports.

The Boohoff Law firm, which has an office in North Port, has announced a $20,000 reward for information that leads law officers to Laundrie, the Sun North Port Reported.

Jerry Torres, who said he is a neighbor of the Petito family, has partnered with Steve Moyer, a former deputy chief of police for Sarasota, Florida, to offer another $10,000 reward to find Laundrie.

“Please share- we have increased the reward for Brian's arrest to $10K thanks to my friends in law enforcement & special forces,” Torres posted to Twitter. “Law enforcement is working tirelessly and they need your help.”