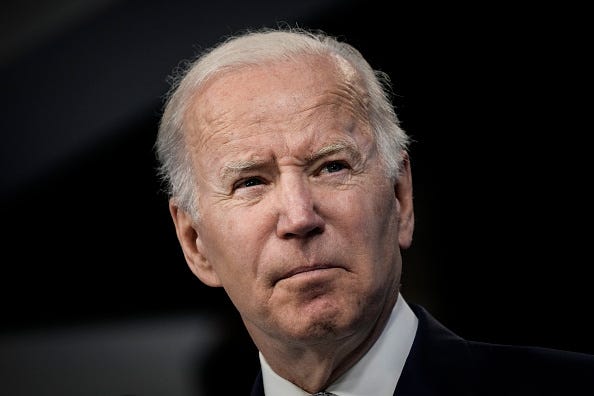 U.S. President Joe Biden speaks about inflation and the economy in the South Court Auditorium on the White House campus May 10, 2022 in Washington, DC. Biden stated that tackling the rising prices is his top domestic priority and accused Republicans of not having a plan to fight inflation. Photo credit Drew Angerer/Getty Images
By Joe Hiti, Audacy

During his Tuesday speech, President Joe Biden offered up reasons for the ailing economy, saying that the COVID-19 pandemic and the Russian Invasion of Ukraine are to blame while saying he is working to curb inflation.

"I want every American to know that I'm taking inflation very seriously, and it's my top domestic priority," the president said.

Biden said that he and his administration are working to combat rising costs and gas prices near record highs — records set in March.

He added that "families all across America are hurting," and he is doing all he can to lower prices across the board.

The president also made clear that he does not think his administration is to blame for the rise in prices, saying, "I think our policies help, not hurt."

When it comes to why Congress hasn't passed certain efforts of Biden's to drop prices, he shared his displeasure for not having full control of the legislative branch.

"We control all three branches of government. Well, we don't really," Biden said.

Biden does have plans to help curb inflation, including raising taxes on billionaires and the extremely wealthy in the country, which he says will "lower everyday costs for hardworking Americans."

He said it will also "lower the deficit by asking large corporations and the wealthiest Americans to not engage in price gouging and to pay their fair share in taxes."

The speech didn't only address the economy and the president's efforts to fight inflation, but he also took time to take shots at Republicans ahead of the midterm elections.

Biden repeatedly called out "MAGA Republicans" and policies that would be enacted if the party took control of the Senate in November.

Biden goes on another unhinged rant against the "Ultra MAGA" crowd... pic.twitter.com/TgWtW1HxMm

This echoed the points Biden made last week during a speech where he called MAGA supporters "the most extreme political organization" in U.S. history.

The president said that if the Republicans take control, then middle-class families will be the ones who suffer.

"The Republican plan is to increase taxes on the middle-class families, let billionaires and large companies off the hook as they raise profits, raise prices and reap profits at record amounts," Biden said. "And it's really that simple."