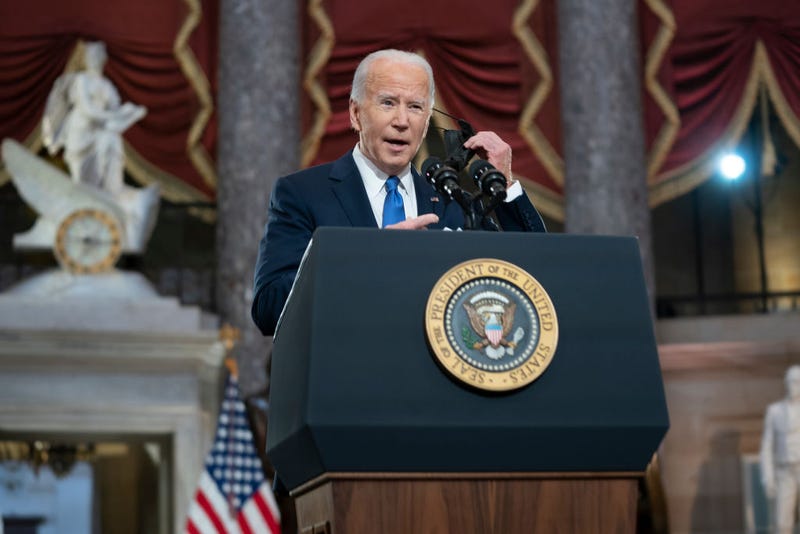 On the one-year anniversary of the deadly assault in Washington D.C., when a mob of Donald Trump supporters stormed the Capitol building in a misguided attempt to overturn the election he lost, President Joe Biden placed blame on Trump for the violence of that day.

"For the first time in our history a president had not just lost the election, he tried to prevent the peaceful transfer of power as a violent mob breached the Capitol," Biden said.

Biden delivered his remarks Thursday morning from Statuary Hall in the Capitol building, the same room that rioters ran through on their way to the House chamber on Jan. 6, 2021.

"Here is the truth: The former president of the United States of America has created and spread a web of lies about the 2020 election. He's done so because he values power over principal, because he sees his own interests as more important than his country's interests, than America's interests, and because his bruised ego matters more to him than our democracy, or our constitution. He can't accept he lost," Biden said.

Biden said Trump spent months planting the seed in the minds of his supporters that the election was flawed.

"It wasn't based on any facts. He was just looking for an excuse, a pretext to cover for the truth. He's not just a former president, he's a defeated former president. Defeated by a margin of over seven million of your votes," Biden said. "There is simply zero proof the election results were inaccurate."

Trump had scheduled his own press conference in Mar-a-lago for Thursday, but later cancelled the event. He said he would address the Jan. 6 anniversary at a previously scheduled rally in Arizona on Jan. 15.

Several rioters have been arrested for their alleged involvement during the insurrection and a House select committee is investigating the event. The committee has interviewed more than 300 witnesses and initiated contempt-of-Congress charges against two of Trump's former top aides. It could conduct public hearings as early as this spring.