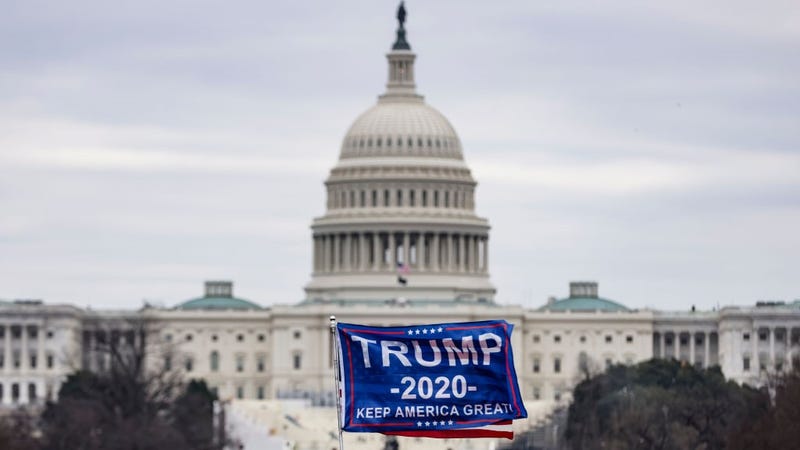 President Joe Biden will address Donald Trump's "singular responsibility" for the US Capitol riots on the one-year anniversary of the insurrection on Jan. 6.

White House Press Secretary Jen Psaki said at a press briefing on Wednesday that Biden has "been clear eyed about the threat the former president represents to our democracy" and how Trump "constantly works to undermine basic American values and rule of law."

Psaki went on to say that Biden will "lay out the significance of what happened in the Capitol and the singular responsibility President Trump has for the chaos and carnage that we saw and he will forcibly push back on the lies spread by the former president in an attempt to mislead the American people and his own supporters as well as distract from his role in what happened."

Vice President Kamala Harris will join Biden and speak in Statuary Hall in the Capitol building, the same room that rioters ran through on their way to the House chamber on Jan. 6, 2021.

Trump has continued the false claim that he won the 2020 election, causing the Biden administration to not directly address him.

"What you'll hear the president talking about tomorrow is the fact that you don't just love your country when you win," Psaki told Dailymail.com. "You love your country, you love democracy in any in any scenario, and what is most disappointing to him is that there has been a silence and, at times, a complacency by far too many Republicans who have sat by and defended the big lie and perpetuated misinformation to the American public."

Trump had scheduled his own press conference in Mar-a-lago on Jan. 6, but later cancelled the event.

Following Biden and Harris speaking at 9 a.m., Speaker of the House Nancy Pelosi will hold a closed-press moment of reflection on the House floor at 10 a.m. She will then speak and hold a moment of silence at 12 p.m.

Democratic Rep. Jason Crow will then give testimonials with lawmakers at 2:30 p.m. about their experiences from the Jan. 6 riots. The final event of the day will be when Pelosi and Schumer lead a Bicameral Prayer Vigil on Capitol Center Steps at 5:30 p.m.

"These events are intended as an observance of reflection, remembrance and recommitment, in a spirit of unity, patriotism and prayerfulness," Pelosi wrote in a letter to lawmakers.