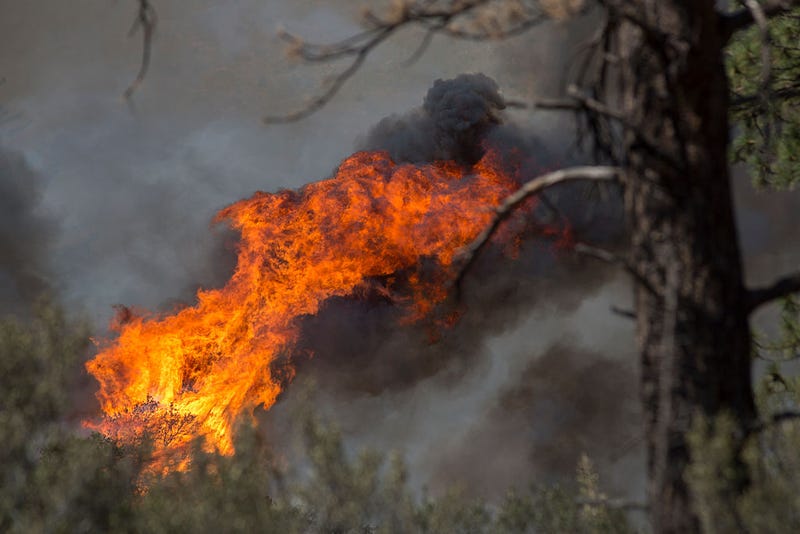 A couple’s dream wedding in wine country has gone viral after a dramatic photo captured the devastating wildfires in the distance.

When planning their nuptials from their home in Chicago, Curtis and Katie Ferland didn’t take into account that there might be a blaze raging in the distance, according to “Today.”

The couple had brought masks for their guests on the urging of their wedding planner and in the end needed to wear them as well.

With the protective masks over their faces to guard from the smoke from the nearby Kincaid Fire, the bride and groom posed for the jarring photo that has since gone viral.

"The sunset was red and smoky because of all the smoke from all the tragedy,” wedding photographer Karna Roa told NBC.

While the pic has gotten a huge reaction on social media, the couple were initially reluctant to take it.

"She had to be talked into it; she didn’t want to do it," Curtis said about his new wife.
"She thought it would be tacky."

Their photographer has performed multiple weddings in the last few years that were near wildfires and hopes the viral photo brings awareness to the devastation.

“As long as it can bring more attention to the wildfires and the problems that Sonoma and Napa County and Northern California are facing, then I would love more people to see it,” Roa told CBS.

Although the smoke forced them to move the reception indoors, the couple still insist they had their dream wedding.

The Kincaid Fire has burned more than 76,138 acres and has forced tens of thousands of people to be evacuated from their homes.

It is one of many fires currently raging up and down the California coast putting millions in harm’s way.