Disney World is getting a makeover.

According to the entrance sign, families are no longer arriving at the place "where dreams come true."

The iconic archway’s new slogan welcomes guests to “the most magical place on Earth,” which is equally as fitting.

The new archway got a sprinkle of pixie dust on Monday, according to Disney, so that the new color scheme better compliments the recently repainted Cinderella Castle. 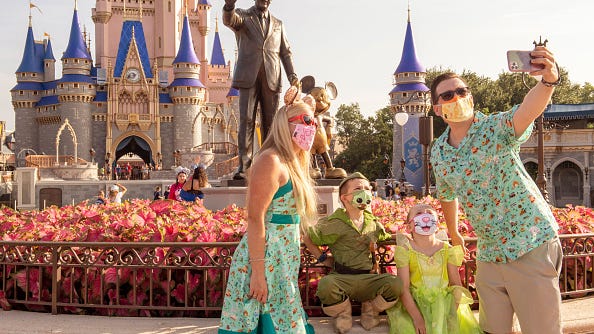 Disney World to remain at 25% capacity, but still no time frame for reopening Disneyland, CEO says

Mickey and Minnie Mouse remain part of the archway along with flags, which now feature a pastel rainbow. They replace the previous nine flags that were all individually colored.

The changes aren’t sitting well with all Disney fans, some of whom think it will make arriving at the park less magical.

Others are more concerned about the timing of these restorations and the money being invested considering Disney World announced even more employee layoffs due to the pandemic.

On Friday, Disney announced it will lay off 11,350 union workers at Walt Disney Parks and Resorts U.S. Inc. on Dec. 31, per FOX.

Disney World was hit hard during the pandemic. Social distancing measures to prevent the spread of coronavirus forced the park to close down in March for four months.