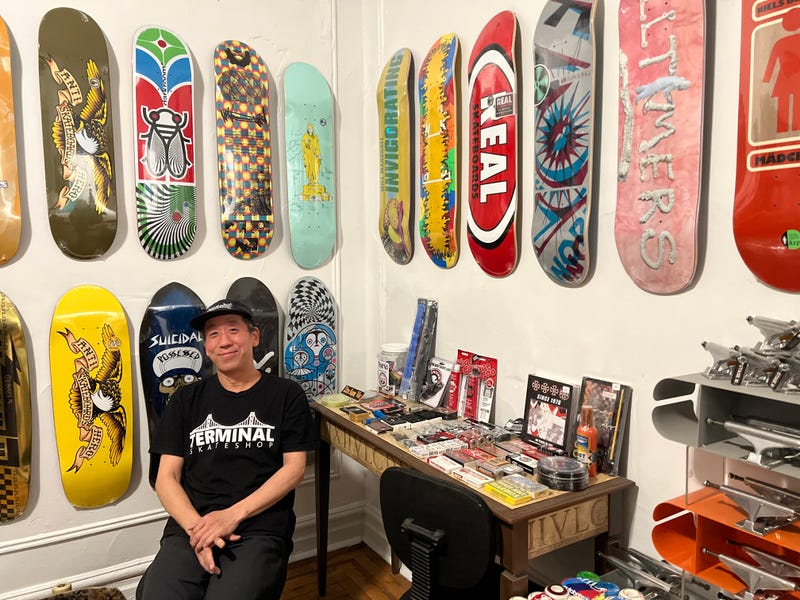 NEW YORK (1010 WINS) — It’s not uncommon for Eugene Kang to Facetime with nervous customers before meeting them.

The 47-year-old smiles and waves through his phone while virtually showing apprehensive buyers around his shop to assure them he’s legit and to make them feel more comfortable.

Hesitant customers are just one of the unique challenges Kang faces running a skate shop out of his Washington Heights apartment. The walls of his two bedroom, 6th floor walk-up are decorated with boards for sale or stickers of different skate brands he’s collected over his nearly 20 years in business.

“I actually made a Google listing for the first time ever this year,” Kang told 1010 WINS. “And apparently, I have all five star reviews and everybody's just saying nice things about me.”

On a map pinning skate shops in the five boroughs, Kang’s Terminal Skate Shop stands out as the only one uptown or near the Bronx. The next closest is in Chinatown. Kang credits a lot of his popularity with a lack of other nearby options for people but more so, his deep love of the sport.

“Opening up a skate shop is a labor of love. There's not a lot of money in it,” Kang explained. “I don't do this for the money. I don't do this because I love money. I love skateboarding. That's why I do this.” 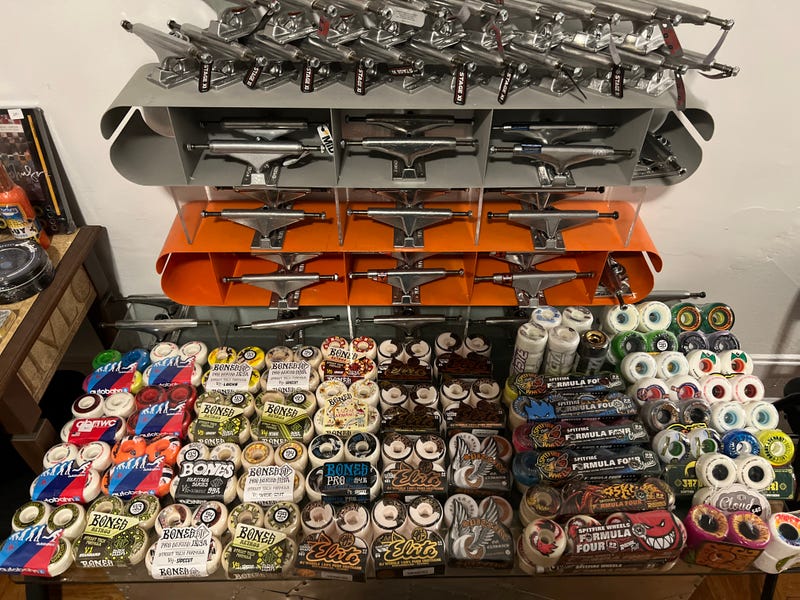 Born in Seoul, Korea, Kang and his family immigrated to the United States when he was five. Along with his brother and parents, Kang initially settled in a small Brooklyn apartment with other relatives before eventually moving upstate.

The Kang family nurtured entrepreneurship. His uncle owned an antique store on 27th Street and 5th Avenue where much of the Kang clan worked, including Kang and his father. While his parents were busy with long hours building a life in a new country and learning the family trade, Kang was out cultivating a business of his own.

“I started selling stuff when I was a little kid in Brooklyn. At first it was toys. Me and the other poor kids would set up a table in front of my friend Mike’s house and sell our old toys or toys we didn't want— mini cars and G.I. Joes,” Kang said.

The youngsters gained a lot of sympathy purchases from adults passing by and Kang liked how it felt to earn some cash to spend, especially for snacks in the summer when there was no free lunch available for him. So, Kang continued to find ways to bring in money.

Eventually, Kang’s parents were able to open up their own modest shop selling items like fine china and home furnishing in Fort Lee, New Jersey. It was there where Kang gained essential business skills.

“I got in trouble a lot. So my parents, every time I messed up, were like, ‘yup, there goes your summer. You're gonna work every day, Monday through Saturday,” Kang recalled. “So I was like, ‘Alright, cool.’ And that's how I learned the business.” 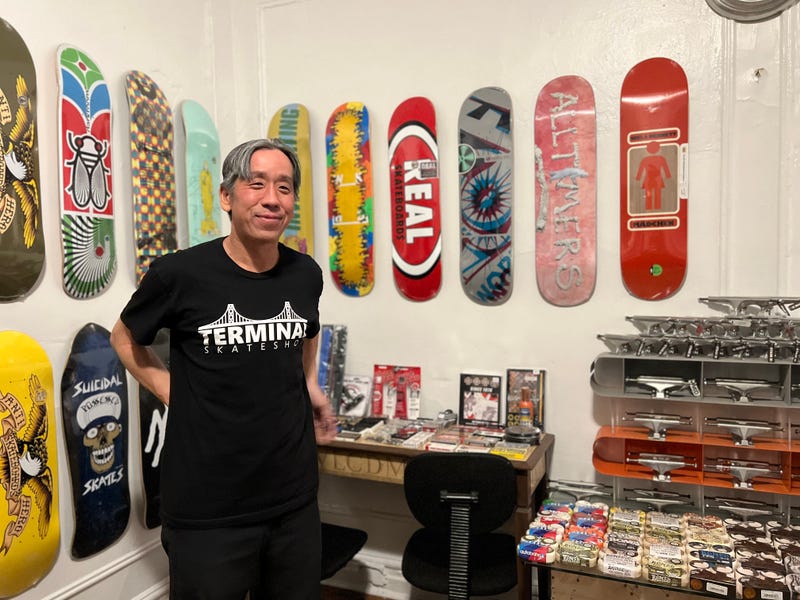 Kang became quite skilled at buying for his parents' store. Where the shop usually attracted an older clientele, with Kang around, the business started to bring in younger folks as he brought inventory that was hip and trendy.

In between upgrading his sidewalk toy sales to a robust high school “store” out of his locker, Kang became interested in something else: skateboarding. After seeing the 1985 film “Back to the Future,” Kang realized he needed a skateboard. His parents took him to Toys ‘R Us after much begging and bought him one. And he loved it. He spent the whole evening finding his balance on the board, rolling down his driveway and feeling excited by his new found interest.

At the time, skateboarding was a niche counter-culture esq hobby that caused Kang a lot of falls which meant too many cuts and bruises for his parents liking. But Kang stuck with it. He loved the thrill of riding and the persistence it took to keep getting back up, something his parents just couldn’t quite comprehend.

“They absolutely hated skateboarding,” Kang said. “They were like it's the worst thing ever, it's taking away from your school, you're not doing the stuff you're supposed to be doing when you're supposed to, you're wasting your time.”

Though Kang’s parents hated the sport, they loved their son so when Kang wanted an official skateboard, rather than plastic toy store one, with a $150 price tag, his parents agreed to match half the cost if he came up with the other half. And he did, selling lollipops at school or cleaning the bathroom at home for $5. 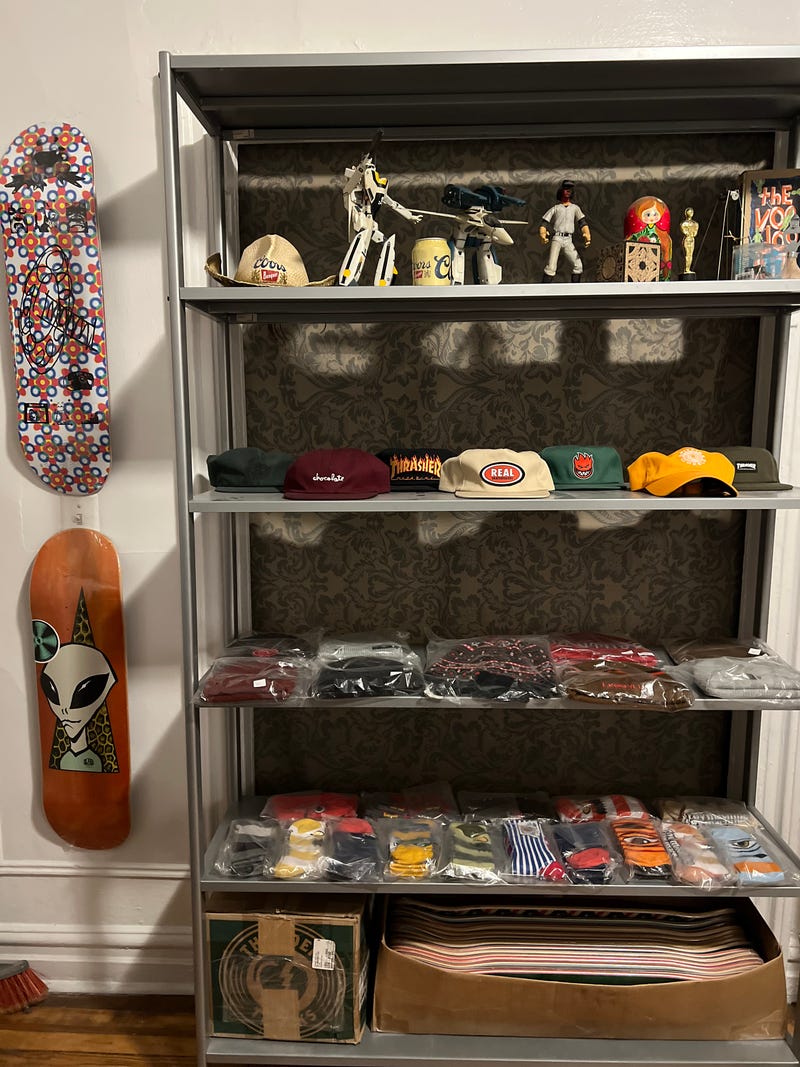 Decades later, Kang’s parents still aren’t too sure about skateboarding, despite their son’s commitment to it. After college and a stint with owning a brick and mortar store, Kang moved to Washington Heights and formed a community around the sport.

Creating a skate shop was never Kang’s intention, rather, it grew from a box of boards in the corner of his apartment. Frustrated with having to travel on the subway and pay for overpriced boards with subpar service, Kang bought that first box of skateboards from a pro-skater associate and sold them to friends.

“More and more kids were skateboarding in the neighborhood,” Kang explained. “And eventually I was like ‘okay, come through,’ and it was really just all word of mouth. If I didn't know you, I'm not telling you to come over here. Eventually, just so many kids are skating and they're like ‘yo, can you get trucks? Can you get wheels? I was just like ‘yeah, alright.’ And then more and more kids are coming through and then I thought ‘I have to actually get legit.’”

Kang wanted to remain so low-key that he initially called his store ‘A Skate Shop.’ But that caused a lot of headaches when it came to sellers and taxes. So he changed it to Terminal Skate Shop, an ode to a now-gone legendary skate spot beneath the George Washington Bridge bus terminal. 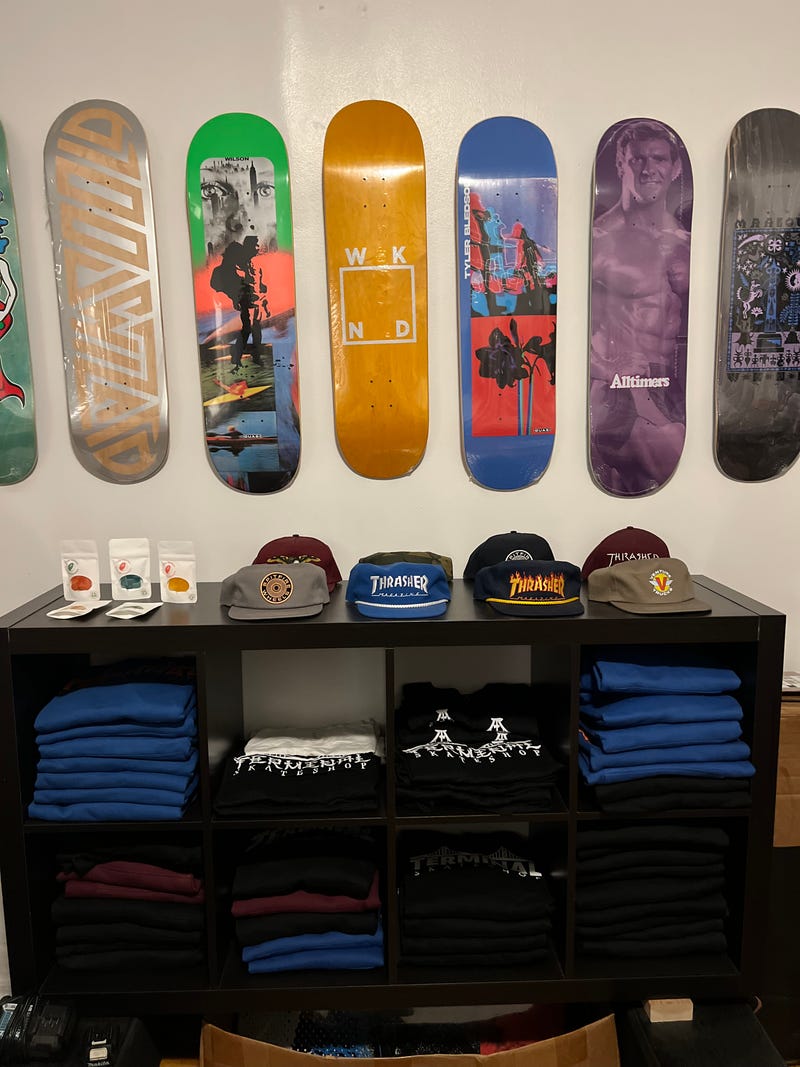 The business started to grow in not only popularity but in size. Kang had to relocate from one of the bedrooms to the living room, hanging boards on walls for display and setting up racks and storage for clothing and board accessories. And when your shop is in your home, boundaries can get a bit blurred.

“Having people come to your home a bunch is hard,” Kang said. “Younger kids try to turn it into a hangout. For the longest time, I just would not let anybody hang out.”

Though he’s loosened up a bit on allowing people to loiter, Kang has other small frustrations, like feeling tethered to his apartment or being on the sixth floor of a walk-up when heavy shipments come. Despite the troubles, Kang has a loyal and supportive customer base which grew from a few friends to strangers from places like Connecticut or Yonkers.

Kang posts pictures of new inventory on Instagram or will have returning fellow skaters text or call when they need something. There’s no set schedule, no opening or closing hours, just casual meet ups for purchases when Kang is not busy skating or working his part time job as a security guard for an art gallery.

Not everyone can open a bonafide retail store in their New York City apartment (not advised), but Kang and his landlord, Richie Bisso, have a rare relationship. Bisso is well aware of Kang’s shop and is quite fond of it. Kang describes his landlord-tenant situation as a “Goldilocks” one, promising to reciprocate Bisso’s kindness and generosity if he ever strikes it big.

“If I ever win a bunch of money, I'm absolutely going to hook him up,” Kang said. 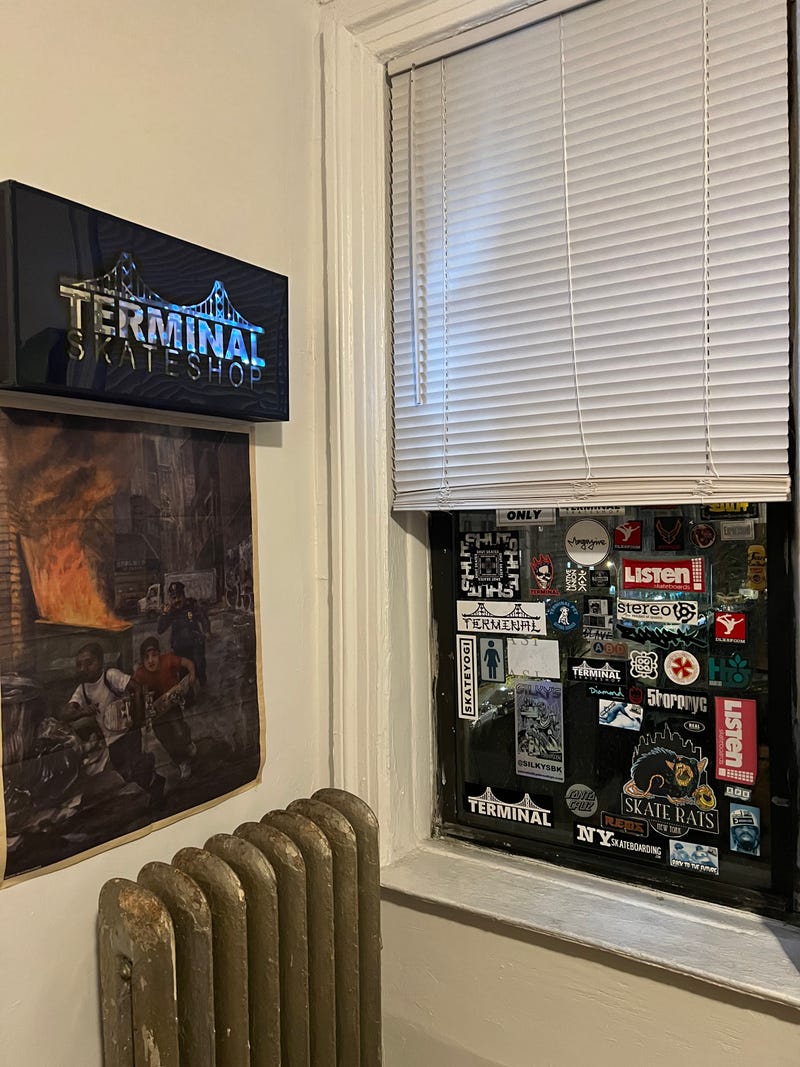 For now, Kang isn’t rolling in dough. His skate shop provides him a comfortable stream of income and he still maintains a part-time job, but what the shop gives him is more time to do what he really loves, which is skate. And the shop gives the community a part of the culture to call their own.

“Everything I've made, everything I've created, everything I've done, is really because of everybody here in this neighborhood,” said Kang. “They gave me the opportunity to share what I love with the people around me, and they supported it. And I'm eternally grateful to be here in the Heights, to be around this community. I couldn't have done it without them.”

As for Kang’s parents, they wrestled for a long time with letting go of the idea of their son becoming a doctor or a lawyer or boasting some other prestigious job title. And while they’ve never blatantly told Kang they were proud of him, he’s heard it in other ways.

“Ten years ago, my mom gave me the best compliment ever, Kang said. “One of the nicest things I have ever heard from her was ‘I never have to worry about you. You managed to make a life for yourself.”