Please don’t squeeze the Charmin, because you may get bit.

A family in Australia came home to find slithering unwanted guest in their bathroom.

After receiving a desperate call about a snake sneaking into the lavatory, Stuart McKenzie and his brave reptile wranglers at Sunshine Coast Snake Catchers made their way over and found the lengthy beast rolled up in a basket of toilet paper on top of the washer and dryer. Snakes on a dryer!

"Just received a call for a large carpet python that's actually gone into a family's bathroom, which isn't good. There's no way it can easily get out, so they need us to come out and get it back outside so the family can have a shower and go to the toilet," McKenzie said in a video posted on Facebook.

After spotting the serpent, McKenzie slowly grabbed the basket from the dryer and used a tool to place the python in a large bag.

While the unexpectedly big size no doubt freaked everybody out, this carpet python was harmless compared to many of the other 20 species of snakes found on Australia’s Sunshine Coast.

"I have caught some snakes in strange places like this before. This is a cool one though," McKenzie told Newsweek. 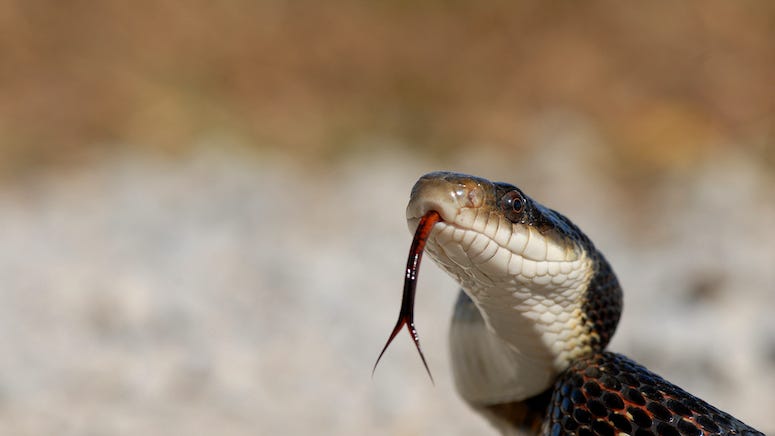 "This wouldn't be the strangest place, but it is certainly somewhere you wouldn't expect to see a snake hanging out."

He later returned the unwelcome visitor back into the wild, but not before offering a friendly goodbye: “See you later buddy, stay out of bathrooms please."

sports
Suns fan casually predicts sweep while knocking out Nuggets fan
news
5 years after Pulse: A conversation with a reporter who was there
sports
Soccer star stable after collapsing on field in terrifying scene
music
Supermodel Helena Christensen, 52, stuns in plunging swimsuit to recreate 1990 modeling photo
news
Police update on Austin shooting that has now injured 14: 'We're going to solve this case'
music
Raven-Symoné reveals how she lost 30 pounds in 3 months: 'I do very minimal exercise'