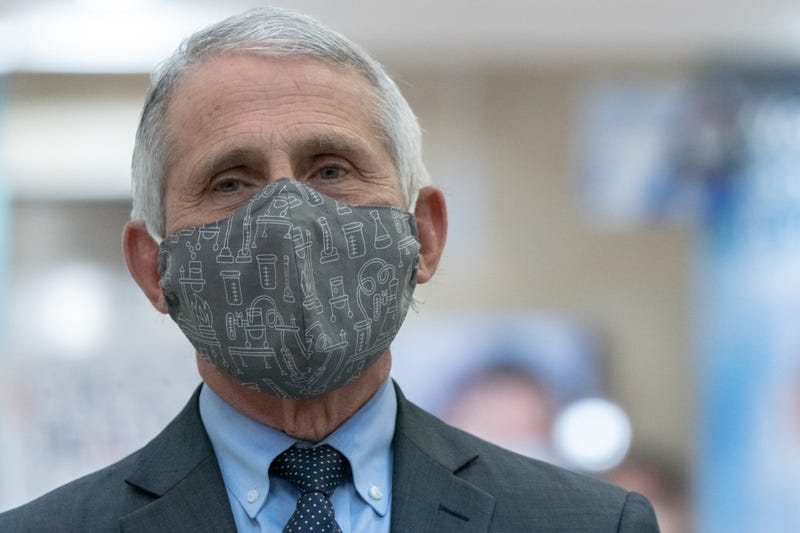 Dr. Anthony Fauci, Director of the National Institute of Allergy and Infectious Diseases, speaks with members of media at Abyssinian Baptist Church on June 6, 2021, in New York City. Abyssinian Baptist Church has been offering COVID-19 vaccines in Harlem, where the infection rate has been higher than the rest of the city but the vaccine rate is roughly only seven percent. Photo credit Jeenah Moon/Getty Images
By Joe Hiti, Audacy

Dr. Anthony Fauci said on Tuesday that the Delta variant is now the “greatest threat” to the nation’s attempt at eliminating and recovering from COVID-19.

The Delta variant, which is more transmissible, was first identified in India and has since made its way across Europe, causing issues in the U.K. It became the dominant strain, accounting for more than 60% of new cases.

In the latest White House news conference on the pandemic, Fauci said that 20% of all new cases in the United States are identified as the Delta variant, that number was just 10% about two weeks ago. With infections doubling every two weeks, Fauci sees this as the same pattern that the Alpha variant had in the U.K.

“Similar to the situation in the U.K., the delta variant is currently the greatest threat in the U.S. to our attempt to eliminate Covid-19,” he said.

Some studies say that the Delta variant is around 60% more transmissible than Alpha, which was more contagious than the original strain from Wuhan, China, in late 2019. Anecdotal reports continue to suggest that the variant may cause some strange symptoms like gangrene and hearing loss. More research needs to be done to conclude those reports, however.

The Director of the CDC, Dr. Rochelle Walensky, was urging Americans to get vaccinated against the virus as she expects delta to become the dominant coronavirus variant in the U.S., according to CNBC. While delta is considered more transmissible, the vaccines are still considered highly effective in protecting against the virus. While on “Good Morning America” Walensky shared that if you get vaccinated, “you’ll be protected against the Delta variant.”

The Biden administration announced yesterday that it would not hit the president’s goal of having 70% of all adults receiving at least one shot or more by the Fourth of July. On Friday, The World Health Organization announced that the Delta variant is becoming the dominant variant of the disease worldwide.

It has the potential “to be more lethal because it’s more efficient in the way it transmits between humans and it will eventually find those vulnerable individuals who will become severely ill, have to be hospitalized and potentially die,” Dr. Mike Ryan, executive director of the WHO’s health emergencies program, said during a news conference, reported by CNBC.

The variant is now present in 92 countries, according to Maria Van Kerkhove, the WHO’s technical lead for Covid.

“Unfortunately, we don’t yet have the vaccines in the right places to protect people’s lives,” she said.

The WHO has suggested and urged nations who can donate vaccine doses to do so, and the Biden administration has been doing just that. Monday, it released a detailed plan as to where it will send 55 million vaccine doses.

“These vaccines are highly effective against severe disease and death. That is what they are intended for, and that is what they need to be used for,” Van Kerkhove said. “This is what COVAX and WHO and all of our partners have been advocating for, that these vaccines reach people most at risk.”