We're inching closer to a COVID-19 vaccine that may restore a sense of normalcy, according to the nation's top infectious disease expert.

Dr. Anthony Fauci recently revealed that a vaccine may be available by April.

The director of the National Institute of Allergy and Infectious Diseases told CBS News on Wednesday that a vaccine “will likely be [available] within the first quarter of 2021, by let’s say April of 2021.”

He explained that researchers should know by “November or December” whether some trials have a safe candidate.

Per CNN, if a safe candidate is determined, there will only be a few million doses available initially.

His timeline pushes back the predictions made by President Donald Trump, who was hopeful that a vaccine would be available by November 3. Trump also said the US can expect 100 million doses by year’s end, which Fauci said is only possible if every vaccine candidate in trials is deemed safe and effective.

In the event that every vaccine is determined safe, it would still be administered toward the end of the first quarter in 2021, per Fauci.

Health and Human Services Secretary Alex Azar also echoed Fauci’s more conservative and realistic timeline stating that a vaccine could be ready by “March to April 2021,” according to The New York Post.

On Sunday, Johnson and Johnson paused their vaccine study due to an “unexplained illness” in one of the participants. 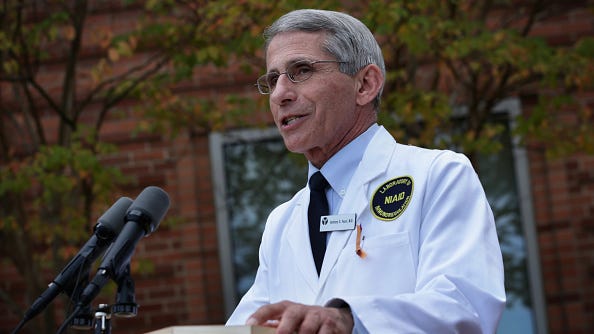 Dr. Fauci said the four words we've all been waiting to hear

Fauci called this a “good indication” that trials are working as intended and people's safety is being prioritized.

Another treatment study, Eli Lilly, also paused their study out of a “potential safety concern.”

“The first dose is no big deal. And then the second dose will definitely put you down for the day for sure. … You will need to take a day off after the second dose,” the unidentified woman added. Most participants said the side-effects outweigh the risk of becoming infected with the virus.

Fauci emphasized proper precautions to avoid getting sick as the United States heads into the fall and winter months. His advice included keeping the windows open when possible and wearing a mask in your house if others in the household may be infected.

In fact, face masks may be here to stay. Earlier in the month, he said Americans would most likely need to wear face masks even after a vaccine becomes available.

“The vaccine availability will go a giant step to controlling the infection, but you’re not going to completely eradicate it or eliminate it,” Fauci added.