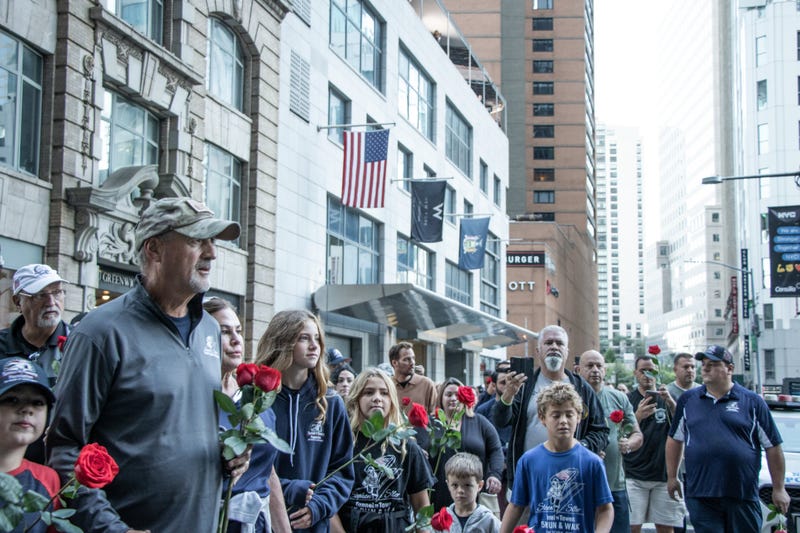 Frank Siller, the founder of the Tunnel to Towers Foundation, poses for photos in New York City after completing his 500-mile walk from the Pentagon to Lower Manhattan on the 20th anniversary of the 9/11 terror attacks Saturday, Sept. 11, 2021. Photo credit Stephen Siller Tunnels to Towers Foundation
By Audacy Staff, WCBS 880 Newsroom

NEW YORK (WCBS 880) — Frank Siller completed his incredible, 500-mile walk from the Pentagon to Ground Zero on Saturday to commemorate the 20th anniversary of his firefighter brother’s death on 9/11.

Siller, brother of late FDNY firefigheter Stephen and founder of the Tunnel to Towers Foundation, walked through six states over six weeks to honor all first responders who died in the terror attack.

“Personally, I wish he was alive and we didn’t have to go through these things—but that’s not the reality; he gave his live and we’re so proud of what he did,” Siller said of his youngest brother. “So that’s why we’re doing what we do.”

The 68-year-old Siller emarked on the “Never Forget Walk”  to raise awareness of, and funding for, the Tunnel to Towers’ mission to helps the families of fallen first responders. He said he had come across police officers and firefighters waiting at rural intersections to offer him support.

6 states in 6weeks, Frank Siller has just ended his journey of remembrance at #TenHouse, one of Stephen's fire houses, 42 days after his start from Washington, D.C. The #NEVERFORGET Walk comes to an end today, 20 years since September 11, 2001. Learn more: https://t.co/baLeeMX4b8 pic.twitter.com/jMn2iPnwbB

“Through his heroic actions, he’s been able to help thousands and thousands of families...he’s changed the outlook of many families that were in despair that lost their loved one I think he would be very produ of that,” Siller said of his organization.