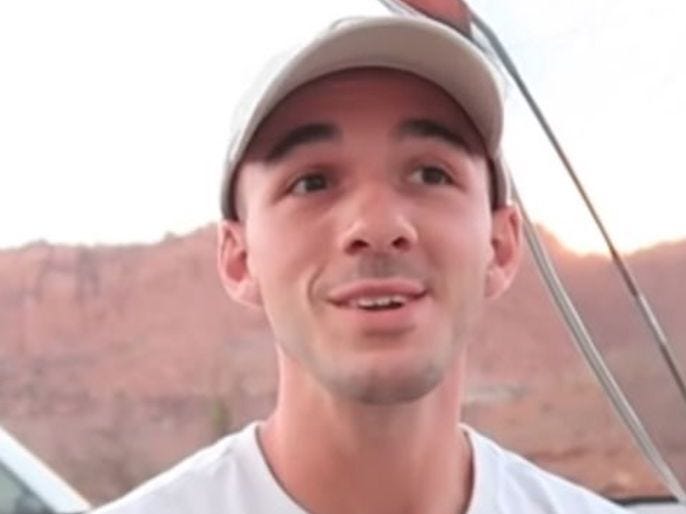 Gabby Petito's fiancé — the lone person of interest in her death — has been missing for more than two weeks as authorities continue to try and track him down. A warrant remains out for Laundrie's arrest relating to his actions after Petito's killing.

A Florida man who was visiting the Appalacian Trail feels 100% convinced he spoke to Brian Laundrie in Tennesse, near the North Carolina border, around midday Saturday.

Dennis Davis told multiple outlets over the weekend that he believe he spotted Laundrie driving a white pick-up truck as David was making a U-turn on Waterville Road, near the trail.

"There is no doubt about it. That was Brian Laundrie I was just talking to. 100%. Not a doubt in my mind," Davis told Fox News.

Davis said the man he believes to be Laundrie drove up to Davis as he was making the u-turn and flashed his truck’s lights, signaling that Davis could complete his maneuver.

After, Davis said the two had a brief conversation on the road.

"I pulled up alongside of the vehicle," Davis said.

“I rolled my window down and I started talking with the gentleman. I could tell right away that something wasn't right with him,” Davis continued.

Davis claimed the man appeared “mentally shot” as he explained that he was heading to California to meet up with his girlfriend, whom he was fighting with.

"He said, ‘Me and my girlfriend had a fight, and man, I love her, and she called me, and I need to go out to California to see her,’" Davis added.

After the conversation, Davis looked up photos of Laundrie and felt convinced enough to alert both the FBI and local authorities of the sighting. Local sheriff offices in North Carolina have said they've received several tips of Laundrie sightings but haven't been able to verify them.

“Mama bear is getting angry! Turn yourself in!” Schmidt wrote, without specifically naming Laundrie, along with the hashtags #justiceforgabby #americasdaughter.

Schmidt went on to retweet a post from Joe Petito and her current husband, Jim Schmidt, who also just joined Twitter.

“It still seems surreal. Miss you Gabs,” Schmidt wrote in a post that included a picture of young Gabby.

She is already saving lives. So many stories being sent to us about relationships being left with proper planning for safety, and people are being found due to her influence. We have much more work to do, but it’s a start. #gabbypetito #justiceforgabby pic.twitter.com/U9bkBlelqf

Gabby Petito’s dad, Joe Petito, broke a six-day social media silence on Saturday to tout the positive impact his daughter has had across the country.

"She is already saving lives. So many stories being sent to us about relationships being left with proper planning for safety, and people are being found due to her influence,” Petito wrote. “We have much more work to do, but it’s a start. #gabbypetito #justiceforgabby”

Petito in late September announced he is launching the Gabby Petito Foundation to provide support to families searching for their missing children.

“No one should have to find their child on their own,” he wrote announcing the foundation. “We are creating this foundation to give resources and guidance on bringing their children home. We are looking to help people in similar situations as Gabby.”

North Carolina authorities are continuing to look into still-unfounded reports of Brian Laundrie sightings in the state — particularly around the Appalachian trail, according to local outlets.

Officials at the Watauga County and Avery County sheriff’s offices confirmed the investigations to WSOCTV, stating that they’ve received multiple tips over the last two days.

The Watauga County Sheriff’s Office told the station they currently have no concrete evidence that would lead them to believe Laundrie is in the area but they noted he may already be familiar with the Appalachian Trail.

“We have been monitoring social media for alleged sightings or information of Brian Laundrie being in this area,” Watauga County Sheriff Len Hagaman confirmed to the Watauga Democrat.

“But nothing has been verified,” he added.

Brian Laundrie’s sister, Cassie Laundrie, saw her brother twice in Florida in September, including at her home and at the park where Brian and his parents camped, according to the family’s attorney, Steven Bertolino.

While it was previously unclear if Cassie had seen her brother after he returned alone Sept. 1 from a cross-country van trip with fiancée Gabby Petito, Bertolino confirmed that she had to NewsNation reporter Brian Entin.

Earlier this week, Bertolino had confirmed that three members of the Laundrie family—Brian and his parents, Chris and Roberta—were at a campground in Fort De Soto Park on Sept. 6 and 7. It appears Cassie also spent time at the park.