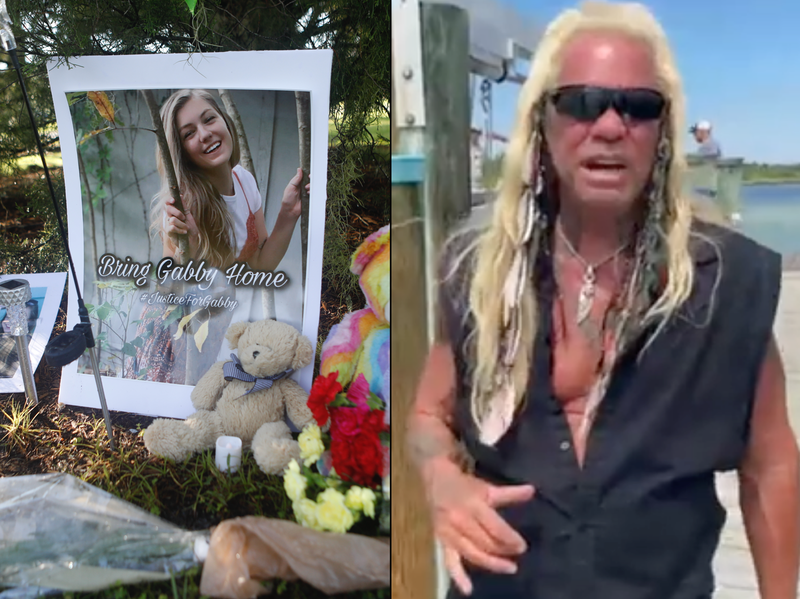 Fox News reported that the coroner plans to reveal the final autopsy of Petito, which usually includes the cause and time of death.

The coroner’s office already ruled Petito’s death a homicide after her remains were discovered in Wyoming’s Bridger-Teton National Forest in late September.

The news conference will be held on Zoom at 2:30 p.m. EST and will be limited to members of the media, according to the office.

Blue plans to make a statement and hold a question-and-answer session.

“Someone sent this to our family the other day. Thank you to the artist for making such a beautiful tribute to our daughter,” Jim wrote in the tweet.

The mural includes an image of Gabby and the words, “She touched the world.”

Duane Chapman, aka Dog the Bounty Hunter, has left the search for Brian Laundrie and returned to Colorado following an injury, according to WFLA.

DOG. Just got an update from Dog the Bounty Hunter’s team. They say he’s headed back to Colorado soon to meet with his doctor after injuring his ankle in the search. He’s also raising funds to continue what he calls an ‘expensive search’. (1/2) #BrianLaundrie @DogBountyHunter

“Just got an update from Dog the Bounty Hunter’s team,” WFLA anchor Josh Benson tweeted Sunday. “They say he’s headed back to Colorado soon to meet with his doctor after injuring his ankle in the search.”

“Team says he’s put together a talented network of local team members he calls the ‘Florida Team’ that will continue the search while he’s gone,” Benson added. “He says he will continue to process leads in Colorado while he’s there.”

Chapman joined the search for Laundrie last month and has focused much of his efforts in the area around Fort De Soto Park, south of St. Petersburg, where the Laundrie family camped days before Brian went missing.

Brian Laundrie’s parents, Chris and Roberta, emerged from their Florida home in the dead of night late Sunday to take down a sign showing Gabby Petito and to remove laundry baskets that had been placed in their front lawn by protesters.

“Just let me do it,” Chris can be heard saying as he picks up the baskets and ignores questions.

The parents also pulled out the sign with a photo of Gabby that had been hammered into their lawn before heading back inside.

Gabby Petito’s family visited a makeshift memorial to her at North Port City Hall in Florida over the weekend.

North Port is the city where Brian Laundrie’s parents have a home. Gabby lived there with Brian before the couple set off on their cross-country road trip that ended in her death.

According to NewsNation, the Petito family retrieved several items at the memorial before officials were set to take it down on Tuesday. Plans for a permanent memorial are in the works, as the current one has been damaged by the elements, the report said.

Before departing the state, Nichole tweeted a photo of a heart-shaped cloud, writing, “Goodbye Florida …thank you for showing us so much LOVE!”

Highlights from today’s North Port Police interview:
-police are “working to figure out” how Laundrie vanished and say “no investigation is perfect.”
-nothing related to Brian has been found in the swamp.
-they are calling circumstances around parents story “a lot of oddness.” pic.twitter.com/chkY9HHv58

Taylor told NewsNation reporter Brian Entin over the weekend that police are “working to figure out” how Brian disappeared.

“No investigation’s perfect,” he said as the department faces criticism over Brian’s ability to slip away.

“We were doing everything within the law that we could with the facts and circumstances at that time,” Taylor said when asked if Brian was being surveilled.

Asked how Brian got away, he said, “That is something that we’re looking to figure out.” While Brian is the sole person of interest in Gabby's death, he had not been accused of a crime when he went missing on Sept. 13; he now has a warrant out for his arrest in connection with a federal fraud-related charge.

“What the family has told us is that he drove out to the park and walked out into the woods,” Taylor said of the Carlton Reserve, where authorities have been searching for weeks since Brian's parents reported their son missing on Sept. 17.

“I mean, we’ve said from the beginning, there’s a lot of oddness here, a lot of things that just didn’t make sense,” Taylor said of some of the actions of Brian’s parents, including that they reported him missing four days after they last saw him. They have not been accused of a crime.