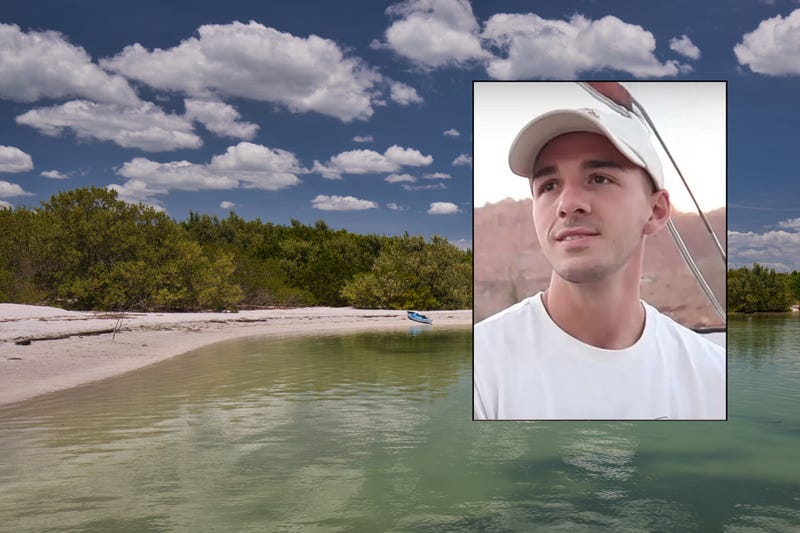 NEW YORK (1010 WINS) – A couple that camped next to Brian Laundrie and his family at a Florida park earlier this month said the Laundries “kept to themselves” before leaving their campsite. The new report comes as authorities continue their manhunt for Laundrie, 23, who was last seen by his parents over two weeks ago after returning to Florida from a cross-country trip without fiancée Gabby Petito, 22, who was later found dead in Wyoming.

Meanwhile, things got tense outside the Laundrie home.

In footage obtained by TMZ, things got heated between some protesters and a neighbor in North Port, Florida, right outside the Laundrie home.

In the expletive-laden video, the red-shirt wearing neighbor goes after the protesters, who seem to be among many who have shouted and made noise on the block over the past few weeks.

The protesters tell the man repeatedly, "You're going to jail!" While the neighbor appears to show them video he took of them allegedly on his property. He then begins to walk away, while the jawing continues.

Unfounded rumors have swirled that Laundrie had purchased a pre-paid “burner phone” before disappearing in mid-September — and TMZ reported that the FBI is currently investigating the purchase, unnamed sources told the outlet.

Laundrie family attorney Steven Bertolino:
"To my knowledge they did purchase a new phone and it's the same phone that Brian left home and which the FBI is in possession of."

"To my knowledge they did purchase a new phone and it's the same phone that Brian left home and which the FBI is in possession of,” the lawyer, Steven Bertolino, said in a statement to NewsNation reporter Brian Entin.

TMZ reports that Laundrie allegedly visited a local AT&T store in their hometown of North Port, Florida, on Sept. 14 — the last day his parents said they saw him. FBI agents reportedly recently visited the store to seize surveillance footage, according to TMZ.

Bertolino told Newsday Wednesday Brian's new purchase wasn't a pre-paid phone and that the mobile device was seized when the FBI conducted its search warrant on the family home.

"The FBI is fully aware of that; I’m fully aware of that," Bertolino told Newsday. "Brian Laundrie needed to purchase a phone. His mother took him to the store to purchase a phone. The FBI is in possession of that phone. It’s the very phone that the FBI is in possession of following their search warrant of the Laundrie property following the indictment from Wyoming."

Chapman said this week that he'd received over 1,000 tips since joining the manhunt for Laundrie on Saturday.

One of those tips has apparently led Chapman to a "remote site" where he believes Laundrie is hiding, TMZ reported. He even claimed he was going to be at the site in "less than an hour."

Chapman thinks Laundrie is alive, and he's pursuing an unconfirmed tip that the 23-year-old fugitive was still "evading capture" as recently as Tuesday night, according to the report.

It's unclear where Chapman may be headed or what led him to believe Laundrie could be there.

Chapman's daughter has been tweeting in recent days about possible Laundrie sightings near the Appalachian Trail in North Carolina. A sheriff's office said it was exploring the unfounded claims.

Law enforcement is still searching the 25,000-acre Carlton Reserve in Florida as the manhunt for Brian Laundrie continues.

NewsNation correspondent Brian Entin said the reserve was still being searched Wednesday, with authorities “focusing on the water.”

NEW: Carlton reserve is still being searched. They are focusing on the water today.

“The Carlton Reserve is quiet compared to past days,” Kuizon tweeted. “We are told a scaled back search continues and remains focused on areas of water.”

The Carlton Reserve is quiet compared to past days. We are told a scaled back search continues and remains focused on areas of water @fox13news #brianlaundrie pic.twitter.com/ygfLbXL87C

Police said Monday that search efforts at the reserve would be “scaled back,” and local reporters had noticed less activity there in recent days compared to earlier this month, when dozens of people were combing the flooded park with the help of helicopters, drones, dogs and swamp buggies.

“I’m told it will be scaled back and targeted based on intelligence,” North Port Police spokesman Josh Taylor said Monday of the search.

Meanwhile, the Pinellas County Sheriff's Office said Wednesday that there was no known police activity at Fort De Soto Park, despite new reports that Brian Laundrie and his parents had stayed at a campground there earlier in September. The 1,136-acre park, made up of five interconnected keys, is about 60 miles north of the Carlton Reserve.

Brian Laundrie remains the sole person of interest in the Gabby Petito case, and a warrant has been issued for his arrest in connection with his actions after her death.

A federal grand jury indictment alleges Laundrie used a Capital One Bank card and someone’s personal identification number to make unauthorized withdrawals or charges worth more than $1,000 during the period in which Petito went missing. It does not say who the card belonged to.

A couple from Fort Myers, Florida, told NBC affiliate WBBH that they camped next to Brian Laundrie and his parents at Fort De Soto Park, south of St. Petersburg, earlier this month, days before Gabby Petito was reported missing in New York. And they say a photo from their trip may show Brian.

EXCLUSIVE: I spoke to the couple who camped right next to the Laundrie family in Fort De Soto Park in early September. We looked back on their photos from the trip with them at their home in Fort Myers tonight. You’ll hear the full story coming up at 11 @NBC2 @ABC7SWFL pic.twitter.com/cZBTp309oE

Documents obtained by WBBH from Pinellas County confirm that Marci Newsom and her husband Kenny camped next to the Laundries, who were at the campground on Sept. 6 and 7, according to Laundrie family attorney Steven Bertolino.

Marci Newsom said she and her husband checked in at the campground on Labor Day (Sept. 6), the same day the Laundries arrived.