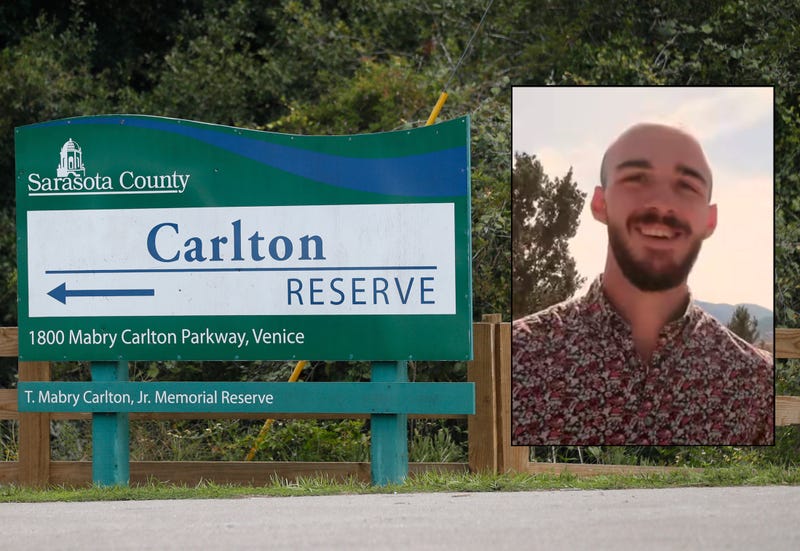 NEW YORK (1010 WINS) – Brian Laundrie’s father was helping authorities search a Florida nature park Thursday for his 23-year-old son, who is a person of interest in the death of fiancée Gabby Petito and is also wanted on a federal fraud-related charge.

Florida police have pushed back against reports that authorities searching for Brian Laundrie came across a fresh campsite.

A source close to the Laundrie family told CNN's Chris Cuomo that law enforcement found “fresh traces of a campsite” in the Carlton Reserve on Wednesday as the weeks-long search for fugitive Brian Laundrie continues there.

But the North Port Police Department told The Post in an email that the report was incorrect.

According to the CNN report, Chris Laundrie's involvement in the search Wednesday was postponed after the discovery of a campsite that appeared to have been recently used, as law enforcement wanted to search the area alone. Brian's father then helped in the search Thursday.

"Today Chris Laundrie accompanied members of law enforcement into the Reserve to show them the trails and places Chris and Brian have hiked and which Brian was known to frequent. There were no discoveries but the effort was helpful to all," Betrolino said in a statement.

Chris Laundrie returned to his home Wednesday following the search and did not answer any reporter questions.

Here's video of Chris Laundrie leaving the Carlton Reserve after spending around 3 hours in the area where the search for his son, Brian Laundrie, is ongoing. (🎥 @JustinRogersTV)

"It seems the water in the Preserve is receding and certain areas are more accessible to search. The entire Laundrie family is grateful for the hard work of the dedicated members of law enforcement that have been searching the Preserve for Brian over the last few weeks. Hopefully Brian will be located soon," Bertolino continued.

Bertolino gave the response to Fox News when asked whether the 23-year-old fugitive could be found Thursday, nearly three weeks after he was reported missing by his parents on Sept. 17. He was last seen four days earlier, on Sept. 13, after going hiking in the area of the Carlton Reserve, a trip from which he didn't return.

A source close to the Laundrie family told CNN's Chris Cuomo that law enforcement found “fresh traces of a campsite” in the Carlton Reserve on Wednesday as the weeks-long search for fugitive Brian Laundrie continues there.

Laundrie family attorney Steve Bertolino said Wednesday that Brian’s father, Chris, had been “asked to assist law enforcement in their search for Brian at the preserve” but that “North Port police had to postpone Chris’ involvement.”

According to the CNN report, Chris’ involvement was postponed after the discovery of a campsite that appeared to have been recently used, as law enforcement wanted to search the area alone.

North Port Police told CNN that the FBI would have to answer any questions related to updates in the search effort, as the bureau is leading the investigation.

“The FBI would have to answer if that was true,” police department spokesman Josh Taylor told CNN, which reached out to the FBI for comment.

Speaking on “Cuomo Prime Time” Wednesday night, legal analyst Joey Jackson noted that “you may find the remnants of a campsite, but the question becomes, ‘Whose campsite?’ It’s a large world.”

Chris Laundrie ultimately joined law enforcement for the first time Thursday in their search of the Carlton Reserve area. He was spotted arriving at Myakkahatchee Creek Environmental Park, which connects to the reserve, Thursday morning and going into the park with authorities.

“Chris was asked to point out any favorite trails or spots that Brian may have used in the preserve,” Bertolino said of Chris’ role in the search.

Bertolino said Thursday that he believes "Brian is still in the preserve."

Laundrie family attorney Steve Bertolino confirmed to WCBS 880 that “Chris Laundrie is assisting Law Enforcement today in the search for Brian” in the area of the Carlton Reserve in Florida. Brian is believed to have gone hiking there before disappearing on Sept. 13, sparking a weeks-long manhunt.

“Chris was asked to point out any favorite trails or spots that Brian may have used in the preserve,” Bertolino said. “Although Chris and Roberta Laundrie provided this information verbally 3 weeks ago it is now thought that on-site assistance may be better.”

“The preserve has been closed to the public and the Laundries as well but the parents have been cooperating since the search began,” Bertolino added.

Brian Laundrie's father, Chris, arrived at Florida’s Myakkahatchee Creek Environmental Park in his red Dodge Ram pickup truck to join the search for his son, according to Fox News.

The park connects to the 25,000-acre Carlton Reserve, where law enforcement has been searching for Brian for weeks.

Chris Laundrie joined up with law enforcement personnel at the park's entrance and was spotted going into the park with them.

Minutes earlier, Chris was seen entering his pickup truck outside his home in North Port, which is about five miles from the park entrance. His wife, Roberta, was not with him.

Christopher Laundrie leaving the house this morning alone. He had a plastic bag. pic.twitter.com/CJUA442iAG