Vice President Mike Pence and Senator Kamala Harris clashed on the topic of racial injustice during the vice presidential debate on Wednesday.

Specifically, moderator Susan Page asked if “justice was served” in the case of Breonna Taylor, a 26-year-old woman in Louisville, Kentucky who was shot and killed by police officers during an attempted search.

None of the three police officers were charged in the killing of the unarmed Black woman. One officer was charged with first-degree wanton endangerment.

“I don’t believe so … her family deserves justice,” Harris said in regards to if justice was served. Harris shared that she was heartbroken talking with Taylor’s mother and family.

"Her life was taken unjustifiably,” she added.

While Pence said his heart breaks for the loss of any innocent American life, he shared his support for the criminal justice system.

“But I trust our justice system – a grand jury that reviewed the evidence,” Pence added. The vice president went on to bring up the unrest that occurred following George Floyd’s death.

Harris also spoke out on the need for police reforrm. “Bad cops are bad for good cops," she said. "We need reform of our policing in America and our criminal justice system.” 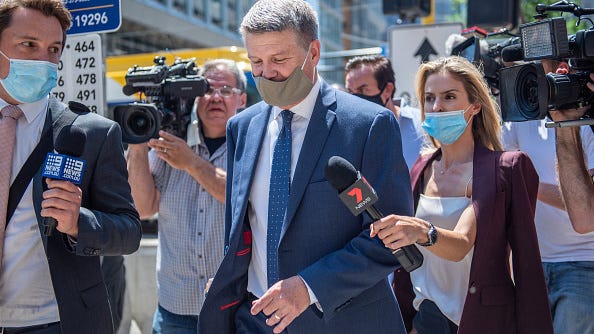 News broke today that Derek Chauvin, the ex-cop charged with murdering George Floyd, posted bond, a move that caused outrage for many in the city of Minneapolis and across the country.

Chauvin’s bond was set at $1.25 million for allegedly killing Floyd with a knee to the neck while Floyd pleaded for his life in the case that sent shockwaves across the country and led to widespread protests continues to this day.

In September, Floyd was in court on tax evasion charges filed in July—two months after he was caught on video kneeling on Floyd’s neck. Chauvin and his estranged wife, Kellie Chauvin, were charged with nine felony counts relating to false, fraudulent, and missing tax returns.

Chauvin’s trial is expected to begin in March 2021.