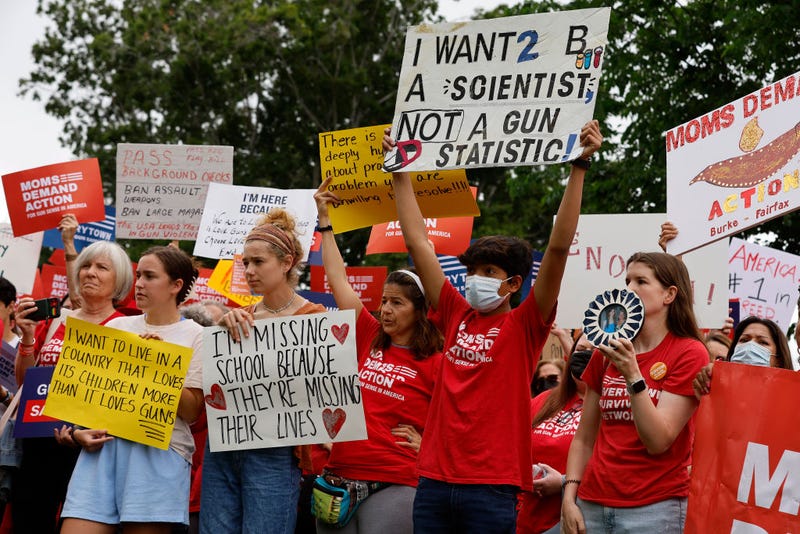 Every time a tragedy like this hits, people ask why it happens so often. Other countries have guns, but no other country experiences this epidemic as frequently as the U.S. Why does the gun culture in the U.S. seem immune from legislative regulation, no matter how many people are killed, even children?

Just this week, a push to ban assault weapons failed in the Pennsylvania House. Democrats tried to pass a domestic terrorism bill in the U.S. Senate too but failed. The final vote was 47-47. All Republicans voted against it.

The bill actually dates back to 2017, when it was first proposed after mass shootings in Las Vegas and Southerland Springs, Texas.

“We just have guns available in a way that other countries don’t,” Dr. Susan Liebell, professor of political science at Saint Joseph’s University, said on KYW Newsradio In Depth.

“Gun rights supporters sometimes talk about the mental illness of the particular shooter or the particular reasons for that one person’s actions,” she said. “But I think the way to understand this is to pull the lens back. And I think one of the main reasons that there are more mass shootings in the United States as opposed to other countries that are like us is access to guns. We have more guns than people in the United States.”

That’s a statistic that gets thrown around a lot, she admitted, but putting it in perspective, she said one could see how easy it is for a troubled 18-year-old to get his hands on a gun and use it impetuously.

Since the early 2000s, the language of guns has centered on freedom, a special right of the individual. Liebell attributes it to a Revolutionary perception.

“Gun rights people say that if we lose any access to guns, we will lose all of our rights. That’s not the case,” she said. “The idea of the minuteman — you can see that in the way that many of these militia groups name themselves, they hope to associate what they’re doing with the American Revolution. They hope to associate guns with a certain kind of protest against tyranny.”

Although mass shootings have not resulted in significant legislative change, it has caused massive physical and mental strains on people’s lives. Just this week, Joe Garcia was grieving the loss of his wife, Irma Garcia, one of the teachers who was killed in the Uvalde attack, when he collapsed from a heart attack and died.

For parents of victims and across the U.S., it’s hard to even describe the feeling of horror, emptiness and hopelessness. This country continues to accept that this just happens here, and as a result, young children are struggling to process fears and problems that adults can’t — or won’t — address.

“If these children end up needing support mentally, we need to get them that. And I think that still remains to be seen with some folks,” Dr. Colleen Lelli, director of the Barbara and John Jordan Center for Children of Trauma and Domestic Violence Education and an education professor at Cabrini University, said on KYW Newsradio In Depth.

“Some people say we’re whining, but there really is a thing called vicarious trauma,” she explained. “Basically, you’re taking on the trauma of someone else. And then we have teachers who are, themselves, in trauma, whether it be a school shooting or their own lives. … It’s a lot to carry.”

Young students have become a “lockdown generation,” having grown accustomed to the ever-present threat of guns in school.

The Uvalde shooting marked the deadliest school shooting in the U.S. since the 2012 massacre at Sandy Hook Elementary in Newtown, Connecticut.

Although mass shootings of that magnitude are rare, researchers at the Naval Postgraduate School have recorded 504 cases of overall gun violence at elementary, middle and high schools since the start of 2020 — a number that eclipses the previous eight years combined.

Mass shootings in schools have remained a grim presence in America, but their numbers have held relatively even in recent years. Since 2012, a total of 73 students have been killed in school shootings that witnessed at least four victims shot and two victims killed, according to research by James Alan Fox, a criminologist at Northeastern University who studies mass killings.

Last year there was one school shooting of that scale, a rampage at an Oxford, Michigan, high school that left four students dead.

“There really hasn’t been an increase in large-scale shootings at schools. When you look at the risks, they are extremely low,” he said. Fox described the increased gun violence during the pandemic as an “aberration,” saying there’s “no reason to think the numbers will continue to rise.”

Still, other experts worry heightened school violence could continue. They say students are as stressed as ever after a traumatic two years, and schools lack the resources to help. They also point to factors such as the nation’s increasingly divided political and cultural climate.

Related podcast: How parents are handling the Texas shooting: