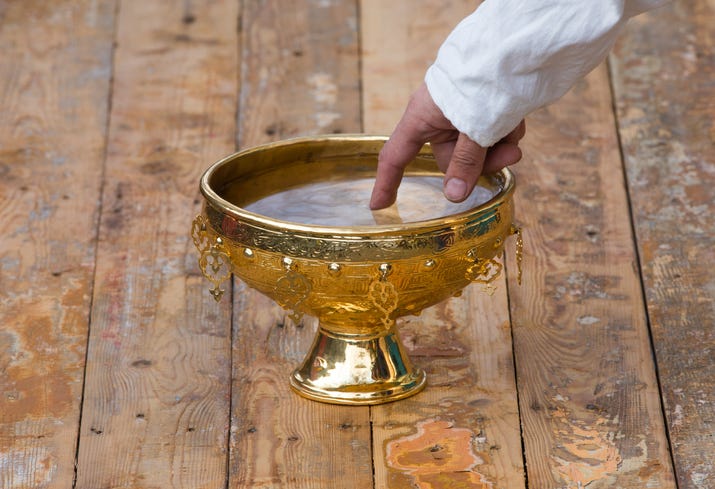 If you want to walk on water it’s going to cost you a pretty penny.

Sneaker worshippers have gotten fanatical about repurposed Nike Air Max ‘97s which have been injected with water from the River Jordan that was blessed by a priest, reported the New York Post.

The so-called “Jesus Shoes” by Brooklyn design company MSCHF initially went for $1425, sold out in minutes upon their release, and are currently going for more than $3800 on resell sites. Holy cow!

Here's the #MSCHF and INRI customized #Nike Air Max 97s based on the miracle of Jesus walking on water. The pair has been filled with water from the River Jordan and then blessed, meaning wearers are able to theoretically walk on Holy Water: https://t.co/7e3PrAGQxN
Photo: ... pic.twitter.com/p07RFs8r2N

The divine kicks feature other religious customizations like frankincense-scented insoles, a steel crucifix attached to the laces and a side inscription of “MT 14:25” to represent the bible verse Matthew 14:25. In addition, the spine of the sneaker reads “INRI,” which is Latin for Jesus of Nazareth, King of the Jews, while the tongue has a single drop of blood meant to symbolize the blood of Christ.

If any of this seems blasphemous to you, you’re not alone. The creative label says they designed the Jesus-inspired sneakers to mock other recent fashion collaborations.

“We thought of that Arizona Iced Tea and Adidas collab, where they were selling shoes that [advertised] a beverage company that sells iced tea at bodegas,” MSCHF’s head of commerce Daniel Greenberg said. “So we wanted to make a statement about how absurd collab culture has gotten.”

Greenberg added: “We were wondering, what would a collab with Jesus Christ look like? As a Jew myself, the only thing I knew was that he walked on water.”

It should be noted, the shoes have no official ties to Nike, as MSCHF bought the Air Maxes at retail stores and then added the customizations by hand.

Fans looking to get their hands on a pair of the “Jesus Shoes” can say a prayer and sign up on the MSCHF’s site to be alerted 24 hours before the next batch drop from the heavens on the second and fourth Tuesday of each month. Hallelujah!