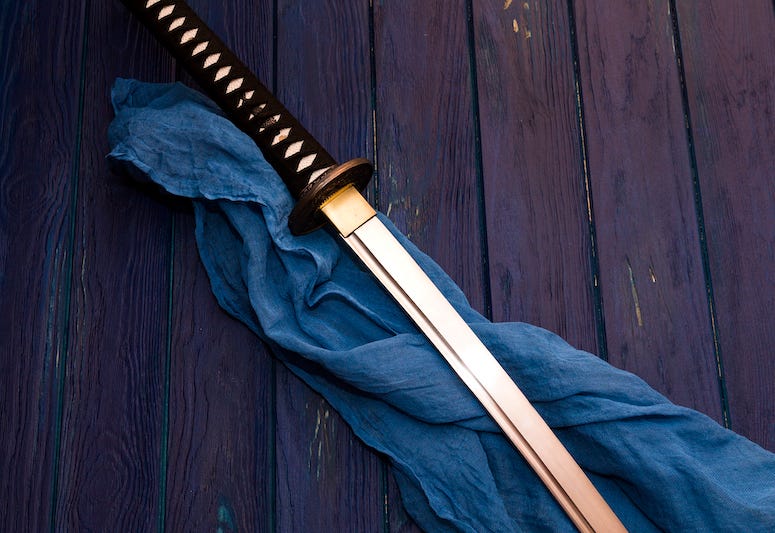 Last month, a man in St. Petersburg, Florida woke up for work one morning to discover a burglar in his kitchen.

24-year-old Daemeion Grady stole the man's laptop, and then armed himself with a piece of decoration adorning the walls of the homeowner's house: a samurai sword.

Grady allegedly used the sword to threaten the homeowner, who works from home remotely. Grady demanded he throw as many valuables as he could into a hamper, and then into the man's truck, which he also stole, Tampa Bay Times reports.

According to the police report, Grady allegedly had "the victim’s replica Samurai sword in one hand and the victim’s vehicle keys in the other hand."

Fortunately, the police were able to quickly track down Grady because in his haste, he accidentally left his phone at the scene.

The police located the missing samurai sword, which had Grady's fingerprints on it, and arrested him last week.

Grady, who has a lengthy criminal history, is now facing charges of armed burglary, carjacking, and resisting arrest. He was also charged with possession of controlled substances, methamphetamine and crack cocaine with intent to sell.

According to the sheriff's office, Grady remained jailed on Monday pending a court hearing.

music
Lauren Alaina finally shared the details about the movie she's starring in this September 2021
music
Ewan McGregor's daughter Clara shows up to red carpet with fresh dog bite on her face
music
Foo Fighters warming up for MSG with intimate, vaccinated show in Los Angeles
sports
Former MLB clubhouse manager alleges giving foreign substance to Scherzer and Verlander, among others
music
16 movies to watch for Father’s Day
music
Dr. Dre is opening his own high school to reach 'the inner-city kid, the younger me'