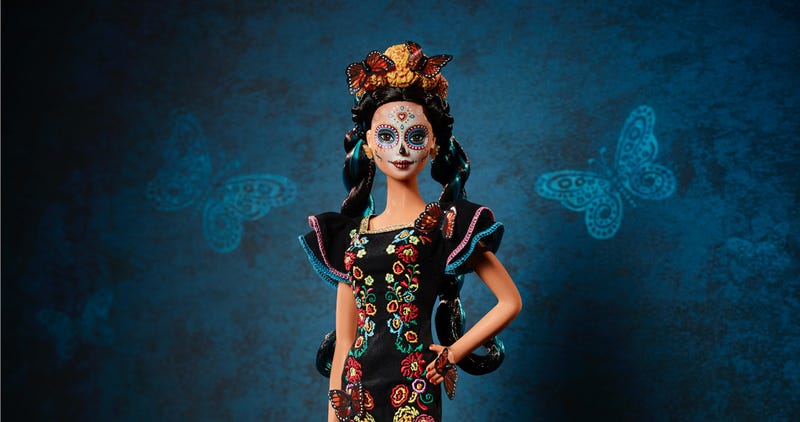 Barbie’s latest makeover is showing off her spiritual side.

Mattel has announced they’ll be releasing a Day of the Dead Barbie to celebrate the Mexican holiday Dia de los Muertos, according to People.

Day of the Dead Barbie Will Reportedly Be Released Ahead of Mexican Holiday — Here's Where to Buy https://t.co/6I5sTXU9Fh

Starting September 12th, a limited-edition version of the iconic doll wearing an elaborate headpiece with monarch butterflies, an embellished black floor-length gown and a painted face featuring the traditional skull mask design will be available for purchase for $75 at Walmart, Target and Amazon.com.

Dia de los Muertos is a 3000-year-old Mexican tradition in which family and friends celebrate and pray for their loved ones who have died. Considered a jovial holiday, followers believe the spirits of the departed are joined with the living during the two-day event.

Individuals create offering alters (known as ofrendas) in the name of the deceased featuring candles, toys, food and other trinkets.

Fans of Pixar’s 2017 blockbuster “Coco” should be familiar with the holiday as the events of the film play out on the eve of Dia de los Muertos.

While some people have accused Mattel of cultural appropriation, Mexican American designer Javier Meabe said he created the Day of the Dead Barbie to expand awareness of the tradition around the world.

“I know how important this tradition is and the responsibility involved in representing this culture, so it wasn't taken lightly,” Meabe said.

“I just hope people know how much love we put on this doll and how much respect we have for the Day of the Dead.