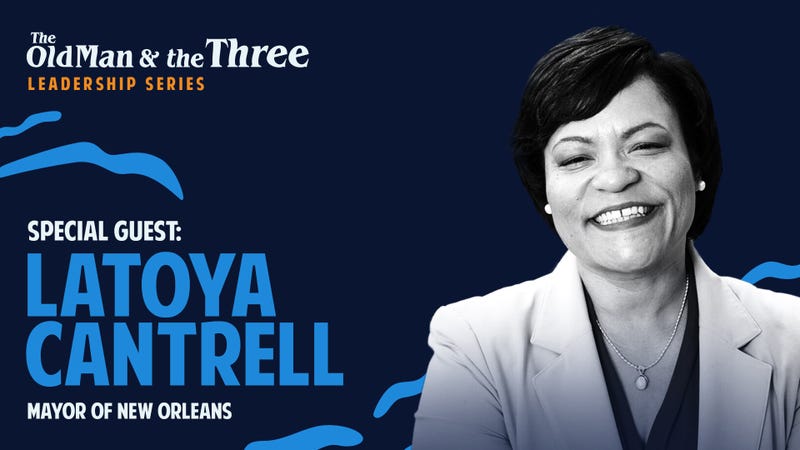 Mayor LaToya Cantrell has had to face some tough decisions in the past year as the mayor of New Orleans. Mardi Gras festivities have been pared down, and it all began with last year’s move to cancel St. Patrick’s Day. But giving back to the community is her motivation for it all.

In the midst of a pandemic, Cantrell spoke with JJ Redick and Tommy Alter on “The Old Man & the Three” podcast from RADIO.COM's Cadence13. She began by talking about why she loves New Orleans so much.

“The spirit of the people. The courageousness, the resiliency, the culture of this city that is unlike any other in the United States of America,” she began.

She first visited the city as a sophomore in college. “My first time was in 1988. And I was on a trip with my mother and my grandmother,” she said. After that initial visit, she knew she would be back.

“I knew when I was leaving I knew that I wasn’t going to go back to live in LA. I knew I would be in the south,” she explained.

And while Cantrell’s time in New Orleans has been great for her, she’s had to face some difficult decisions, shutting down some of the cities most loved events in the wake of the coronavirus pandemic. It’s all about looking out for the community for Cantrell.

“You have to look out for people even when they don’t want to look out for themselves or look out for one another, but you have to set the tone. And that was a very difficult decision to make almost a year ago with St. Patrick’s Day which is a huge deal,” she said.

The decision didn’t come without its backlash. “Took a lot of heat on that, but it was the right thing to do,” she said. Now, Cantrell faces decisions about how to handle this year’s Mardi Gras festivities, but the decision to shut down celebrations comes with more ease.

“Here we are Mardi Gras 2021 where we know a little bit more about this virus that we didn’t really know a year ago. So not difficult at all making the decisions that I’ve had to make here recently,” she said.

“if we want to come out of it and not have it be another year, then we need to do the right thing and it starts with me having to make those tough decisions,” she continued. “If we want to get back to where we know we will get to, we have to do what it takes right now.”

For Cantrell, it’s all about setting a good example. “Demonstrating that progress is being made. This city has been on the national stage…We have led the state of Louisiana,” she said.

In the end, Cantrell knows that her decisions will benefit the greater community. “You’re always going to have those who aren’t happy, but in the end, they’ll be okay. You demonstrate,” she said.

"I love being the mayor of the city. I love it all. I love my job. Even with the challenges - but we have to face the challenges in order to fix them," she added.

When it comes to those who want to make a difference in their own communities, Cantrell has some advice. "The little things matter. So what I would say - you start small...It sends a message because people see the difference and it's infectious," she said.

"You shouldn't be dying on a hill by yourself. People should be with you," she added.

To hear the full interview, listen to "The Old Man & the Three" on the RADIO.COM app.