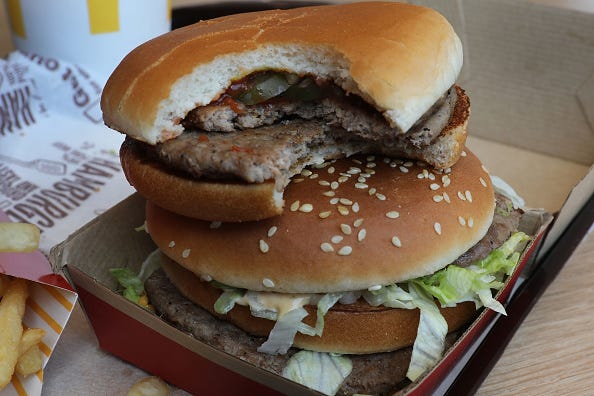 If you were thrown off, disgusted, or disturbed by the 20-year-old McDonald’s burger that recently went viral, don’t be.

McDonald’s says there’s a very logical explanation as to why the burger looks as fresh as the day it was purchased.

Last week, a burger that David Whipple bought from the chain in 1999 in Logan, Utah took the internet by storm because it looks like it could have been ordered just 20 minutes ago rather than 20 years ago.

EXCLUSIVE: You won't BELIEVE how good this 20-year-old hamburger looks. Adam Forgie sat down with David Whipple to get...

McDonald’s admitted that despite its delicious and barely-aged appearance, the burger “had definitely undergone some changes,” according to Fox News.

But they explained that it’s entirely normal for a burger, any burger, to remain intact under the proper conditions.

“In the right environment, our burgers, like most other foods, could decompose,” said Anne Christensen, Director of Field Brand Reputation for McDonald’s. “But, in order to decompose, you need certain conditions — specifically moisture.”

“Without sufficient moisture – either in the food itself or the environment – bacteria and mold may not grow and therefore, decomposition is unlikely. So if food is or becomes dry enough, it is unlikely to grow mold or bacteria or decompose. Food prepared at home that is left to dehydrate could see similar results. Similarly, this particular burger is likely dried out and dehydrated, and by no means the same as the day it was purchased,” she continued.

Those claims were supported by Donald W. Schaffner, a Food Science professor at Rutgers University, who called them “entirely factual.”

According to Schnaffner’s analysis, since the chain cooks their burgers well-done, it’s possible they killed off many of the micro-organisms that would cause decomposition.

He even considered that Utah’s arid environment played a factor.

“If you were to rehydrate that burger somehow,” he explained, “the micro-organisms could start the dehydration process.”

He said it’s hard to determine if that’s what happened without all the information like how the burger was stored, but Whipple said that he simply put the burger in his coat pocket and forgot about it.

“It got stuck in a coat pocket. The coat got thrown in the back of my van, and I guess it just got hung up on our closet in Logan,” he told KUTV.

The good news is that nobody performed a taste-test to see if it tastes just as fresh as it looks… yet.