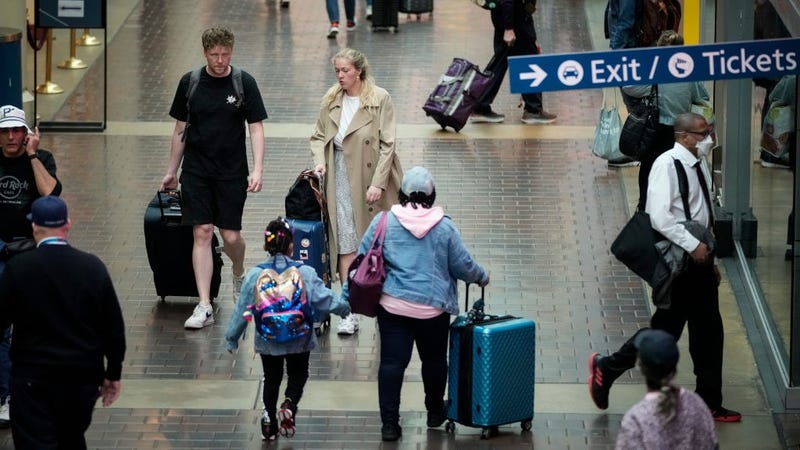 WASHINGTON, DC - MAY 27: Travelers with luggage walk along the concourse on their way to board an Amtrak train at Union Station on May 27, 2022 in Washington, DC. Millions of Americans are expected to take to the skies, roads and rails for holiday travel over Memorial Day weekend. AAA projects that 39 million people will travel this weekend, which would make it the busiest holiday weekend since 2019. Photo credit Drew Angerer/Getty Images
By Colin Martin, Audacy

Even though inflation has caused the price of gas, plane tickets, and hotels to go through the roof, a high number of Americans are expected to travel during Memorial Day Weekend.

AAA predicts that 39.2 million Americans will travel at least 50 miles away from their homes this weekend. That's 8.3% more people than in 2021, and just shy of the 42.8 million Americans that went away in 2019 for MDW before the COVID-19 pandemic ruined all travel plans in 2020.

In their predications for Memorial Day Weekend travel this year, AAA broke down how many people are expected to travel by car, plane, or another form of transportation.

Most people, 34.9 million, are expected to just drive to their destination during the three-day holiday weekend. The national average for regular gas is currently $4.599 per gallon, according to AAA, and is as high as $6 in California.

Amir Eylon, president of Longwoods International, a travel and tourism market research consulting firm, told The Washington Post that people are willing to pay for the constantly rising gas prices in order to see their friends and family members.

"For these two years, we’ve missed family gatherings, weddings, bar mitzvahs, graduations — all these things with friends and family," Eylon said. "Now that the fear of covid among travelers has significantly subsided — and despite inflationary pressures — folks are determined to get out there."

AAA added that about 3 million Americans are expected to get on a plane to travel this weekend, while another 1.33 million will get to their weekend plans by bus, train, or even take a cruise.

The average lowest price of a plane ticket is "6% more than last year coming in at $184/ticket with Saturday being the most expensive day to fly and Monday the least," AAA noted. Hotel prices and car rentals are also more pricey this year than in the past for Memorial Day Weekend.

"Daily car rental rates have decreased 16% compared to last year, with the average lowest rate coming in at $100/day."

AAA Senior Vice President of Travel Paula Twidale spoke to Fox Business about the amount of travelers expected during Memorial Day Weekend, saying that people are willing to pay the extra costs.

"Certainly there will be some behavioral changes, but people are going to travel… they are not willing to give up the respite that they deserve," Twindale said.

"You may see behavioral changes like being a little bit more flexible, trying to save money, choosing to travel with a buddy… saving up about 20% to book that information in advance to get the better deal," she added.

70-year-old Larry Roessner of Myrtle Beach, S.C., is one of many that's willing to deal with the higher prices in order to go away for the weekend. He told The Washington Post that it will cost about $600 to $700 for the two-day trip he and his wife will take up to Atlantic City in their RV.

"I’m retired," Roessner said. "What else am I going to do? … We’re going to go have fun and not worry about it."