After nearly a year on the coronavirus pandemic frontline, the United States has passed a milestone.

More people across the nation have received the COVID-19 vaccine than have tested positive for the deadly virus.

According to Bloomberg’s Vaccine Tracker, 26.5 million people in the United States have received one or two doses of either the Pfizer or Moderna vaccine.

The number on confirmed vaccinations has passed the 26.3 million confirmed cases of COVID-19 since the global outbreak began.

“It’s worth noting that today, for the first time, the data said that more people were vaccinated than were reported as newly diagnosed cases,” Paula Cannon, a professor at the University of Southern California’s Keck School of Medicine, said. “That’s worth celebrating. I’m all for that win.”

Reports have shown many people who tested positive are asymptomatic. Health officials say it is hard to confirm how many people had COVID-19. Numbers show that Americans are receiving about 1.35 million doses a day. Of that number, 1.8 percent of the population has received two shots, and 7.8 percent have gotten their first dose.

Bloomberg reports that the United States has been giving out vaccines faster than any other country. However, the country is a long way from herd immunity. Officials estimate that 70 to 85 percent of the nation needs to be vaccinated or exposed to the deadly virus to reach that goal.

With various highly-contagious COVID variants being reported in the United States, even those who have previously tested positive stand a chance of being reinfected. 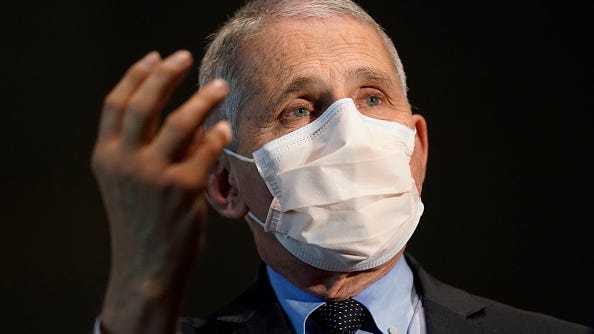 Dr. Anthony Fauci, director of the National Institute of Allergy and Infectious Diseases, has been continually giving advice and educating the public on the COVID-19 pandemic.

Fauci is urging Americans that if these variants become dominant, people who previously had COVID-19 have a “very high rate” of contracting COVID again.

"If it becomes dominant, the experience of our colleagues in South Africa indicate that even if you've been infected with the original virus that there is a very high rate of reinfection to the point where previous infection does not seem to protect you against reinfection," Fauci said.

Fauci also stressed how important it is to get vaccinated. The doctor also explained how vaccination can also stem the development of more mutations.