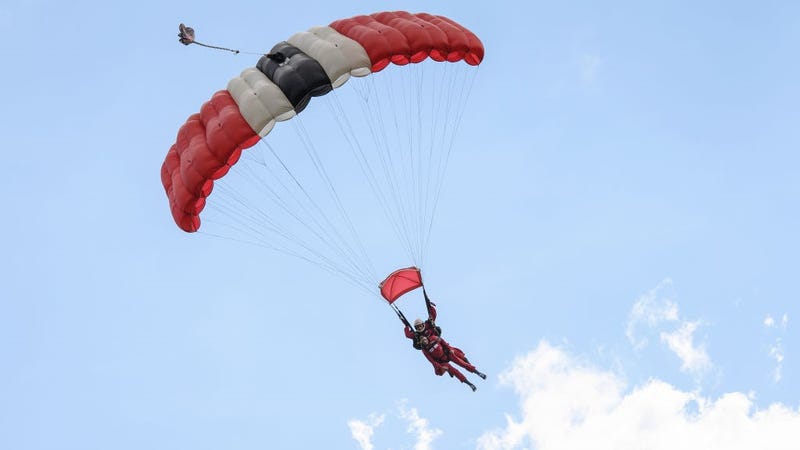 Going skydiving is a bucket list item for a lot of people, but setting a world record in the process would take it to the next level.

A group of more than 100 people, all at least 60 years old, went skydiving together on Sunday in Perris, Calif., with the goal of breaking the Guinness World Record for most people over 60 to skydive at once.

The group goes aptly by the name "Skydivers Over Sixty," and had 107 people who were anywhere from 60-to-78-years-old attempt the jump from 18,000 feet up in the air, according to KABC.

They do not let their age get in the way of exhilarating activities.

"Just because you are over 60 doesn't mean you have to sit down and not participate in activities," Fredrick Winsser, 75, told the news station. "There's all kinds of possibilities you can do. I scuba dive as well, I used to ski, skydiving is the cats meow."

The record-setting jump took four days of practice, as they needed to figure out what the best formation would be to accomplish the feat in a one minute timeframe. After six practice jumps, they nearly set the record on the seventh try, but were unsuccessful at the end of the day.

"The formation built perfectly. It was just one person that was out," Dan Brodsky-Chenfield, president of Skydivers Over Sixty. "And that's the trick of doing large formations, is that all 107 people have to have a perfect minute at the same minute."

The current world record was set back in 2018 by 75 people in Illinois, according to KNBC.

Skydivers Over Sixty were going to try to break the record a few more times, but bad weather caused the jumps to be cancelled. However, they won't give up that easily, and will attempt to set the record again next year.