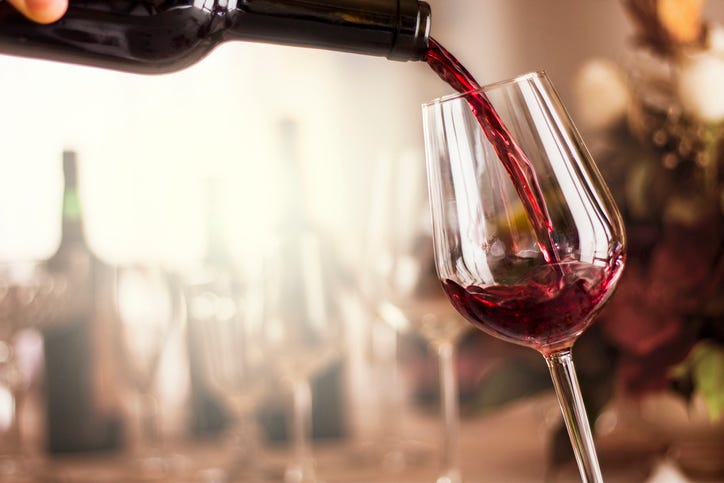 That’s exactly what Eleanor Walton did after red wine nearly ruined her all-white jumpsuit while at a horse race in England over the weekend.

Enlisting the help of her good friend Mia Williamson, the two quickly sprang into action by grabbing four more glasses of wine to further stain her clothes into a more cohesive look, according to People.

so we’re 2 hours into the races, and el comes and tells me someone has spilt red wine down her... no problem. Got some more red wine and fixed it and I think we’ve just made a new product to PLTs festival range pic.twitter.com/fXnJKYfNc2

The result was her soiled outfit morphed into a pink tie-dye getup that appeared downright fashionable.

“So we’re 2 hours into the races, and el comes and tells me someone has spilt red wine down her... no problem,” Williamson captioned a before and after side-by-side photo of Eleanor’s fashion mishap. “Got some more red wine and fixed it and I think we’ve just made a new product to PLTs festival range.”

PLT is short for PrettyLittleThing, the brand of the formerly white jumpsuit.

Maintaining a positive attitude throughout the potentially day-ruining incident, Eleanor even shared a photo of herself trying to dry her stained outfit under a hand dryer in the bathroom. This is a ‘make it work’ moment!

Eventually the fashion brand caught wind of the wardrobe malfunction and retweeted Williamson’s images with the humorous caption, “Safe to say that wasn’t a ‘pour’ decision.”

Many folks online praised Eleanor’s inventiveness as one person commented, “This is brilliant.” Another added, “I actually can’t get over this. This is ART gals.”

But others were quick to point out the problem of being drenched in wine.

“So she just walking around with damp clothes. I hate that feeling I know it's sticking to her skin,” a concerned person tweeted. While another pointed out the obvious by sharing, “Just imagine the smell.”

Despite it all, Eleanor never let the situation get the best of her.

She added, “Part of me wanted to go home and change, but I was having too much fun and didn’t want to let a spill ruin my day.”