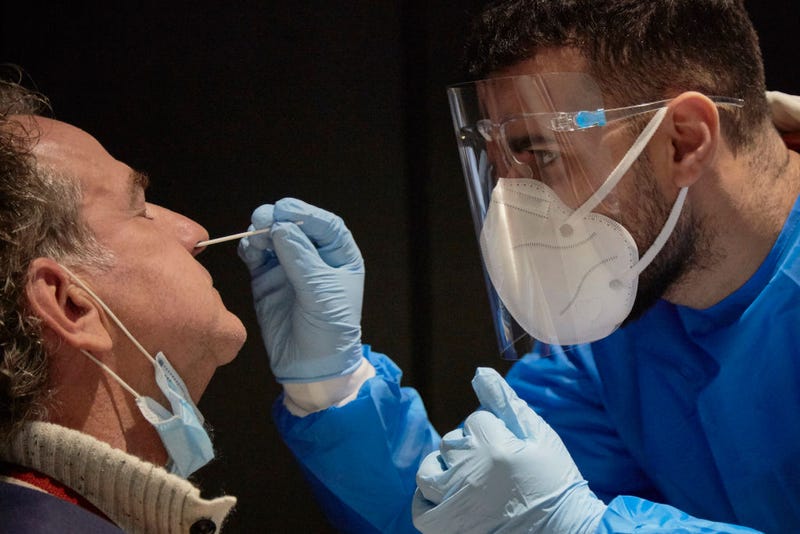 The passenger of a flight from South Africa is tested for the Coronavirus at Amsterdam Schiphol airport on December 2, 2021 in Amsterdam, Netherlands. Photo credit Pierre Crom/Getty Images
By Natalia Gurevich, KCBS Radio

More cases of the omicron variant are popping up as the days go by, and now researchers are reporting that the new variant is three times more likely to cause reinfection than delta.

These new findings are coming from a new study out of South Africa, where the first cases of omicron were detected.

"You basically went from zero cases detected to a situation where 90% of the samples had the variant," said Dr. Bruce Y. Lee, Professor of Health Policy and Management at City University of New York on Friday's "Ask an Expert" with KCBS Radio's Holly Quan and Dan Mitchinson.

Now, this initial study suggests that reinfection is more likely with this new variant. "But you have to keep in mind that this is all preliminary information, because this has only been observed for a couple of weeks," said Lee.

People should keep this new information in mind, "with a grain of salt," he said.

It's important to be proactive about raising awareness about the new variant, because the next couple of weeks are going to be critical for researchers, said Lee, "to determine if the vaccine offers as much protection."

Pfizer and Moderna have indicated that they will likely know more by then if the antibodies can hold up against the new strain.

The lab-driven experiments don't need as much time to be completed as "natural experiments," where scientists observe the virus operating in people "out in the wild," and how susceptible people might be, said Lee.

Researchers are also trying to determine how transmissable it is and whether it’s more virulent than the previous generations.

It's also still unclear how severe the symptoms are in comparison to other strains, but based on early anecdotal reports, omicron-related symptoms are more atypical, and milder, than what has been seen before.

But it is important not to panic, or to jump to conclusions right now, he said.

The emergence of omicron serves almost as a reminder of things that people should have been doing in the first place, to buckle down in the next few months by wearing masks, staying distant, and adhering to other guidelines.

There was an upswing in cases in November, because, "the concern has always been that the colder weather, the drier weather, and people moving indoors for holiday gatherings, holiday travels, would lead to a winter surge," said Lee, and people were becoming laxer about safety.