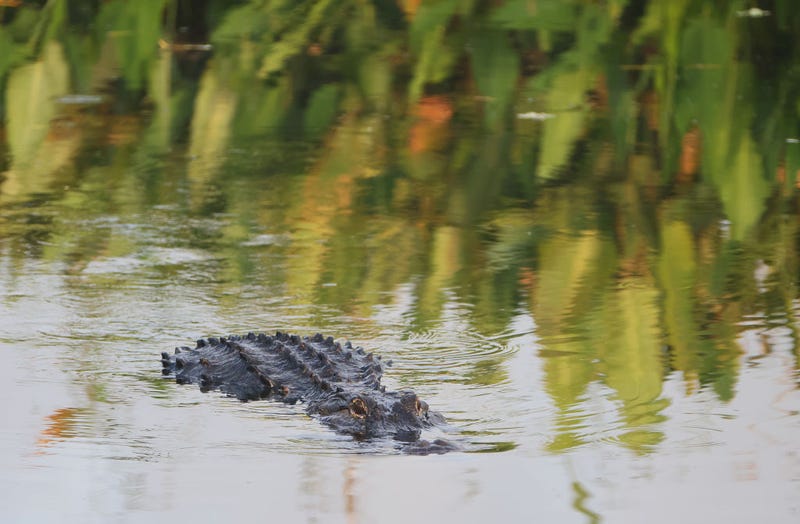 A Florida woman had a close call with a wild alligator during a recent paddle boarding excursion.

In one video, the gator is seen confidently approaching Baker’s board. As she pushes it with her paddle, it hisses and swims away.

In another video, she explains that the gator tried eating her board. While the moment isn’t captured on video, she posted photos from the alleged incident.

Photos of that Gator coming after me

"I had to push it away with my paddle and then I paddled away fast," she told FOX 35 News.

In the video, she can be heard asking the gator: "Why are you messing with me?"

"Why are you trying to bite me?" she questions.

As she poses the questions, the gator remains calm and continues floating on a log.

After she paddles away to a safe distance, Baker said that she believed someone has been feeding the gator, which the outlet reports is not only dangerous but also illegal as Florida law prohibits the feeding of alligators.

"Somebody's been feeding that gator—makes them very dangerous,” she exclaims.

Newsweek has not been able to verify the allegations.

According to the Key West Aquarium, alligators typically don’t approach humans as they fear them and don’t regard them as prey.

However, it notes that dangerous situations have increased due to irresponsible behavior from humans, which includes feeding and harassing gators. Baker’s photos and videos have stirred up mixed emotions on social media.

"This is why I will never kayak in Florida," one person wrote.

Others defended the alligator and said she was in his space and “disrespecting wildlife.”

A third user insisted that she was the aggressor while the alligator “wasn’t aggressive at all.”