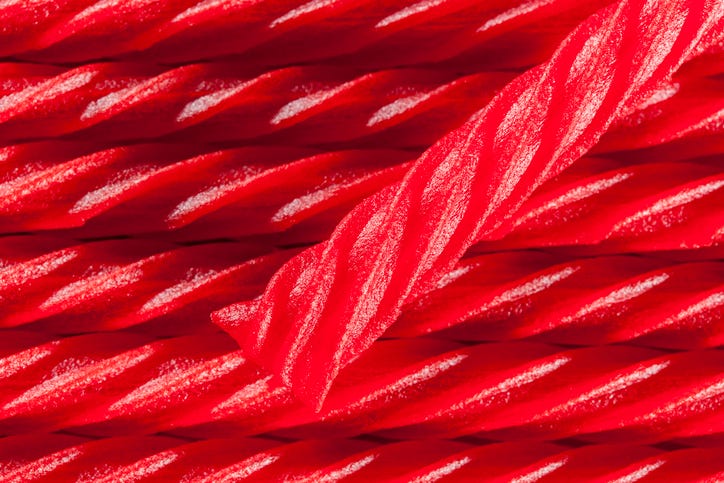 Lebron James may have scored a season high of 40 points during the Los Angeles Lakers vs. New Orleans Pelicans on Tuesday, February 25, but that’s not what has the Internet buzzing.

James revived a longtime debate on social media last night after he was spotted eating Red Vines on the bench.

The clip quickly went viral as fans flocked to socials to argue over which red-tinged twisted sugar sticks are better: Red Vines or Twizzlers?

It’s incredible how two similar confections can elicit such strong feelings and responses from public, but the debate has left the Internet collectively divided.

When another reporter pointed out that they are two different brands of candy, and the box reflects it, SHAQ didn’t seem to care brushing it off with, "I don’t care what it says on the box,."

One Twitter user supported SHAQ’s opinion stating, "@SHAQ is 100% right. It's Twizzlers. All day every day. Try going to the movies and pop in some butter popcorn and Twizzlers."

@NBAonTNT @SHAQ is 100% right. It's Twizzlers. All day every day. Try going to the movies and pop in some butter popcorn and Twizzlers. Whoooooo!! BTW, Red Vines are turrrrrble. pic.twitter.com/w4KV9H70uA

Another user disagreed arguing that Twizzlers are “waxy and disgusting” while Red Vines are “soft and amazing.” The user then added that “Pull and Peel" on Red Vines is "way better than Twizzlers as well.”

@SHAQ Twizzlers are waxy and https://t.co/8XhrrNXxlu Vines are soft and amazing. Pull and peel is way better than Twizzlers as well.

TasteMade compared and contrasted the confections and found that a piece of Red Vines has 22 calories compared to Twizzlers’ 40 calories.

They also determined that Red Vines have less ingredients and lack preservatives, so they can go stale quickly, while Twizzlers are “loaded with added sugar and preservatives."

However, their findings didn't stop them from declaring Twizzlers as the taste-test winner.

What’s your sweet take? Vote in our poll below!