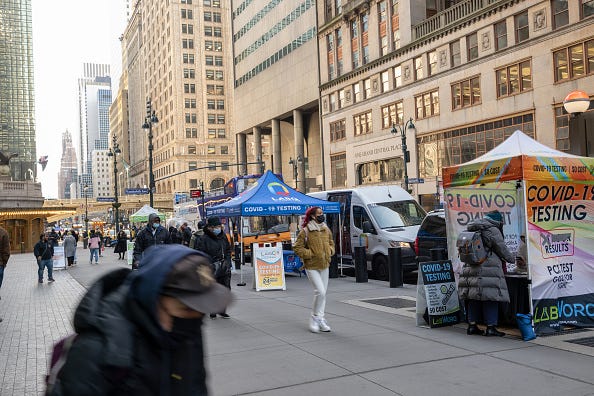 NEW YORK (WCBS 880) -- The protection of a prior COVID-19 infection was on par or more effective than getting solely getting vaccinated during the delta surge, according to a new study done by New York health officials.

The study, the largest of its kind, is a collaboration between New York and California, and pit infection and the vaccine against each other in effectiveness, but just before omicron took hold.

Health officials ultimately said those vaccinated and previously infected with COVID had the best protection.

Rosenberg underscored that getting infected while being unvaccinated is not something people should do.

“That’s not the safe route to choose, the risk of death or severe illness the first time is high, and that’s definitely not a path we want anyone to choose,” he said. "Having COVID, obviously, is a very risky thing. It's not something we recommend at all. We recommend that all New Yorkers go out and get vaccinated."

The study primarily looked at the delta variant wave last year during the summer and fall before omicron arrived, which Rosenberg is likely changing things up.

"There has been a very large increase in reinfections of people who had got COVID before and are getting it again,” said Rosenberg.

Experts said there are a number of possible other factors at play, including whether the vaccine’s effectiveness simply faded over time in many people and to what extent mask wearing and other behaviors played a part in what happened.

Another thing to consider: The “staunchly unvaccinated” aren’t likely to get tested and the study only included lab-confirmed cases, Wherry said.

CDC officials noted other limitations. The study was done before the omicron variant took over and before many Americans received booster doses, which have been shown to dramatically amplify protection by raising levels of virus-fighting antibodies. The analysis also did not include information on the severity of past infections, or address the risk of severe illness or death from COVID-19.