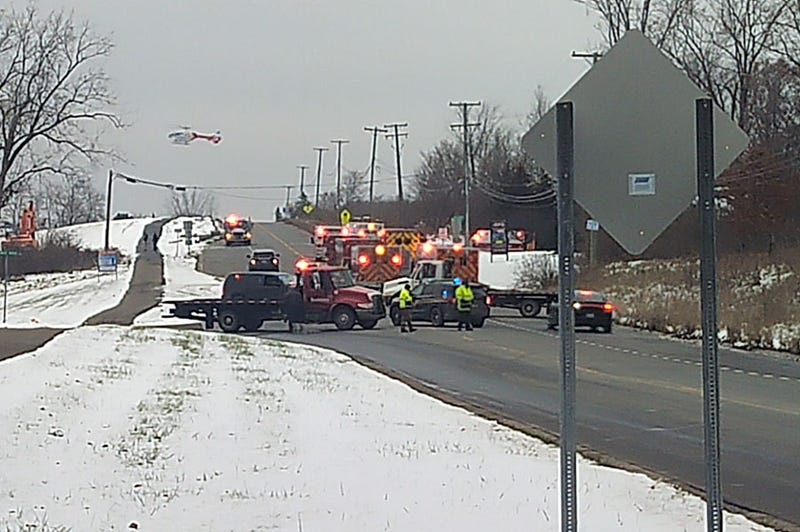 Police shut down the roadway to keep traffic away during an active shooter situation at Oxford High School in Oxford Township, Michigan, on Nov. 30, 2021. Photo credit Terrance Vails/WWJ
By Audacy Staff, WWJ Newsradio 950
Updated on

Three students have been killed, and eight more wounded in a shooting at Oxford High School in Michigan.

The Oakland County Sheriff's Office said it responded to an "active shooter "at Oxford High School in Oxford Township, just before 1 p.m. Tuesday.

Undersheriff Mike McCabe said four to six people were shot; although there are no confirmed fatalities as this time. He said officers are still doing a secondary search of the school for any further victims.

Authorities have one suspected shooter in custody along with a handgun, McCabe said, and police do not believe there are any additional shooters at this time.

He said there are multiple patrol units and multiple EMS units on scene, along with SWAT and an Aviation Unit.

WWJ's Jackie Paige got a call from a parent who said his daughter Cheyanne, who is in ninth grade at the school, called in hysterics saying there was an active shooter at the school.

Oxford High School Junior Nora Wright, who was in the school at the time of the shooting, told WWJ's Jon Hewett her afternoon class had just begun when she looked out the window and saw students running outside in the snow.

"Everyone was just kind of confused about what they were doing...and then we kept hearing gunshots," the teen said. "And then we immediately went under the desks and our teacher locked the door."

"It was a few (gunshots) and then it stopped for a second, and then there were more," Wright told Hewett. "And it did that a few times, and there was nothing else."

There remains massive police presence on the scene at the school, on N. Oxford Rd. Tipsters counted dozens of emergency vehicles on Lapeer Road, and there is no access to the school campus at this time.

Even before the school district sent an alert to parents saying there was an "active emergency" and a lockdown at the school, social media was lit up with posts about the developing situation.

There is no information this time about those who were shot, including their conditions. It's unclear if they are students.

McCabe said all evacuated students were being moved to the Meijer store on N. Lapeer Rd. for reunification with parents or relatives.

Lapeer Schools were also on lockdown out of an abundance of caution, but that lockdown has since been lifted.