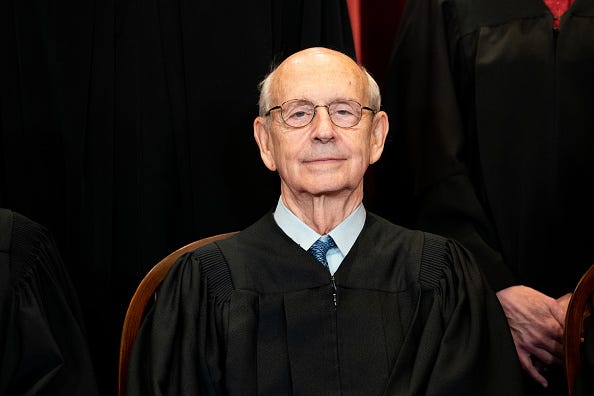 Associate Justice Stephen Breyer sits during a group photo of the Justices at the Supreme Court in Washington, DC on April 23, 2021. Photo credit Erin Schaff-Pool/Getty Images
By Joe Hiti, Audacy

After almost three decades of serving on the nation's highest court, Supreme Court Justice Stephen Breyer will be stepping down at the end of his current term.

Breyer, who is the oldest justice at 83, is one of three liberal justices on the court. His decision to retire after 27 years will allow President Joe Biden to select his successor who could serve the nation for several decades, according to multiple reports.

The decision to retire will also allow the court to remain at a 6-3 split between conservative and liberal justices.

For months now, Breyer has been urged by liberal activists to retire so that another Liberal justice could fill his seat with Democrats holding the Senate and White House.

Some pointed to Justice Ruth Bader Ginsburg saying she should have stepped down while President Obama was in office.

The calls for him to retire went as far as the progressive group Demand Justice renting a truck to drive around the Supreme Court with a sign that read, "Breyer Retire. It's time for a Black woman Supreme Court justice."

For years, both sides of the aisle have argued against raising the number of Supreme Court Justices, depending on which side had control. However, even with Biden supporters leading the recent call, Breyer disagreed, saying it would risk undermining the confidence in the court.

Breyer, a moderate-to-liberal member of the court, has been a part of several significant decisions during his time on the court after being appointed in 1994 by then-President Bill Clinton.

When it came to how Breyer thought the Constitution should be interpreted, he thought it should change with the times, which put him at odds with conservative justices.

"The reason that I do that is because law in general, I think, grows out of communities of people who have some problems they want to solve," he said in an interview, NBC News reported.

The court's new term begins on Oct. 3, and Biden is expected to nominate a successor quickly.