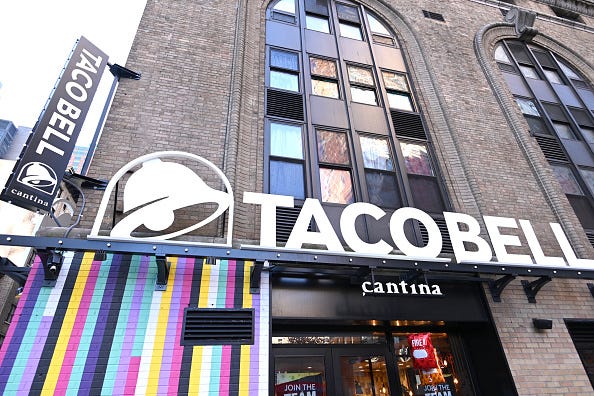 There are a lot of Taco Bell deals coming your way in the new year.

The fast-food chain has announced they are expanding their $1 offerings by adding 21 items to their menu in 2020, reported Business Insider.

As the dollar menu disappears from fast-food chains, Taco Bell is doubling down in preparation for 2020's breakfast wars https://t.co/FMwgY2u8hf

While they haven’t revealed all the details of the highly-anticipated dollar delights, the taco giant did disclose one of the items on the Cravings Value Menu will include the return of the beloved Double Stacked Taco.

Fans first got a taste of the Double Stacked Taco when it was originally introduced to the $1 menu for a limited-time in 2016.

For making hungry customers wait nearly four years for its return, the brand is upping the options by offering the DST in three flavors: Nacho Crunch, Chipotle Cheddar, and Reaper Ranch.

"It's more important than ever before that we give fans the craveable food they not only want, but can afford, and we've built our menu with some of our most innovative items from $1 to $5 to ensure there is something for everyone," the company said in a statement.

"Committing to the $1 is a priority for us and we're excited to bring back the hugely popular Double Stacked Tacos."

If you need a refresher, the Double Stacked Taco gets its name for wrapping a soft tortilla around a crispy hard shell, with a layer of cheese in between.  It’s then stuffed with seasoned beef, lettuce, cheese, and your choice of sauce to make it the ultimate meal for a buck.

As if things couldn’t get any better, Taco Bell isn’t even making you wait until next year to wrap your mouth around one. All three varieties of the Double Stacked Taco will be available starting on December 26th.  It’s the day after Christmas miracle!

With the 21 items being added in the coming months - including the Double Stacked Tacos - that will give you over 40 budget-friendly pieces of heaven to satiate your appetite.