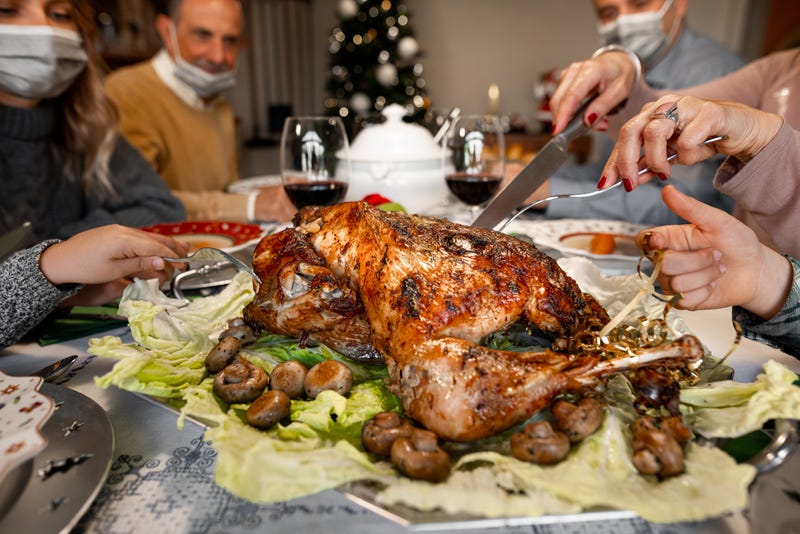 If people are attending Thanksgiving celebrations unvaccinated, masks should be worn when not eating. Photo credit Getty Images
By Natalia Gurevich, KCBS Radio

Thanksgiving is nearly here, and soon after will be Christmas and New Year’s Eve. While the holidays are a festive time and many are looking forward to reuniting with family after being apart, it’s still good to approach big gatherings cautiously.

Particularly with young children, as the vaccine for those aged 5-11 was recently approved and began being administered, many still haven’t received their shot. "They are a source of infection," said Dr. Olveen Carrasquillo, a professor of medicine and public health sciences and Chief of the Internal Medicine Division at the University of Miami​ Health System on KCBS Radio’s "Ask an Expert" on Wednesday with Jeff Bell.

Podcast Episode
KCBS Radio: On-Demand
Thanksgiving will serve as blueprint for how to handle COVID-19 and the holidays this year
Listen Now
Now Playing
Now Playing

People should be trying their best to get their children vaccinated, "But the holidays are upon us now," he said. Children who get vaccinated starting now won’t have enough antibodies to be protected during the upcoming holidays, he said.

"It is of some concern, but it makes it even more important that all adults are vaccinated already," said Carrasquillo.

For those gathering around the table with some that still have not gotten their shots, there are some key elements to remember for trying to convince the unvaccinated to get vaccinated. "We should not put people down, we should not insult them, say derogatory terms about them," he said.

A lot of people have been targeted by misinformation, but they’re also motivated by some fear, said Carrasquillo. Friends and loved ones should try to focus on what is causing those fears. "What is it that drove them to believe in a lot of these sites that have some really outrageous information," he said.
It has to be a "kind, understanding conversation," said Carrasquillo.

Anyone who hasn’t been vaccinated, especially if there are people at the celebration who are high-risk, should consider wearing masks, he said. It’s a difficult conversation to have, and won’t work when people are eating, "but it’s better than doing nothing," said Carrasquillo.

No matter what, if an unvaccinated person is at the table with a high-risk person, there will be the potential for infection.

For those older than the age of 65, getting the booster shot as soon as possible is helpful in preventing infection. So far, rates of booster administration have been a bit low, but the focus for now is making sure that those older and immunocompromised get the booster.

If people can swing it, perhaps in warmer climates, taking the celebration outdoors can help reduce the risk of transmission. "Nothing is 100% safe," he said, but if everyone has been vaccinated, that’s definitely the safest thing to do.

These factors are important to remember as cases surge in Europe and have been picking back up again in the United States, particularly up North like in Michigan, said Carrasquillo. And as of right now, a "fourth wave" is anticipated to arrive sometime in December.

The hope is that the December wave won’t be as significant as the one in August and September, he said.