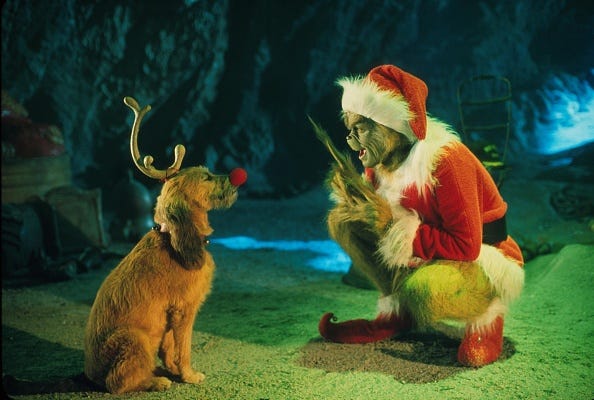 There’s a reason why they call Mr. Grinch “the mean one.”

A family’s holiday photoshoot is going viral after it was photobombed by the notoriously grumpy Grinch.

New Jersey mom and Instagram user @ashleymariemua is spreading Christmas cheer with a video of the photoshoot posted to her page.

The accompanying caption reads, “My kids couldn’t wait to meet the grinch this weekend! I’d say it went well.”

Based on the neutral caption alone, you would think the kids had a really good time meeting the green fella, and that it would be a memory they’d cherish forever.

Well, that last part probably rings true, but it won’t be a fond memory; they’ll now be scarred for life.

The video starts out innocently enough with the brother and sister duo posing for photos outside in their festive pajamas.

From the corner of his eye, the boy notices the Grinch coming out from behind a row of Christmas trees, and let’s just say, he’s not into it.

He makes a run for it with his sister trailing not too far behind him. Both of them have the look of sheer terror painted across their faces.

The video was edited to include the Grinch theme-song, and parts even play back in slow motion.

Don’t worry, there's a happy ending to this story.

Much like the residents of Whoville, the children eventually got over their fear of the Grinch and snagged a frame-worthy photo that will make for the perfect Christmas card.

And the Grinch’s heart grew three sizes that day.