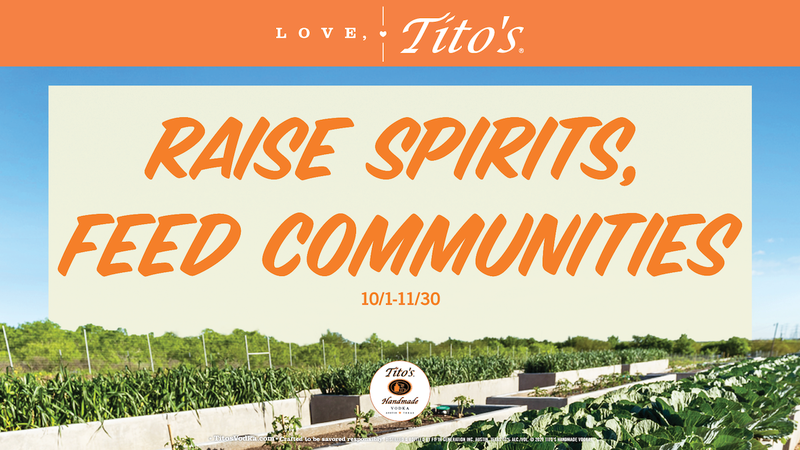 This article is sponsored by Tito's Handmade Vodka.
DONATE NOW!

Tito’s Handmade Vodka is doing their part to raise spirits and feed communities this holiday season.

Love, Tito's, the philanthropic heart of the Austin, Texas-based distillery, aims to turn spirits into love and goodness.

By teaming up with nonprofits nationwide to host events, participating in service projects, and contributing to communities in meaningful ways, Love, Tito's works toward its ongoing goal to make a difference.

Giving back has also been central to Tito’s philosophy since the vodka brand’s inception almost 25 years ago.

During the early days, every time a member of the Tito’s team reached out to support a charity, lend a hand, or say “Thank you for inviting us to help the cause,” they signed off with “Love, Tito’s.” That closing line became a mantra, which turned into a movement.

Over the years, Love, Tito’s has backed thousands of causes – lending a hand to rebuild communities after devastation, spreading joy to those who need a little more, and protecting the environment we all share.

For the 2021 holiday season, Love, Tito’s is continuing its efforts to bring relief to those facing hardships and hunger. Right now, Tito's is supporting local food banks across the country to provide groceries to the folks who need it most.

Join us in supporting local food banks across the country. When you make a donation, we'll match up to $150,000! Donate today by visiting https://t.co/AfXuCjStR3.

Tito’s fans can also join in and get involved with the community effort.  Anyone who donates to a local participating food bank through Pledge will see their donation matched by Tito’s up to $150,000 total.

Participating food banks include Federation of Virginia Food Banks, Atlanta Community Food Bank, and Feeding South Florida, among others.
To learn more and make a donation alongside Tito’s this holiday season, visit pledge.TO/RaiseSpirits.