President Trump and Democratic nominee Joe Biden got into a heated exchange on the topic of race relations at Thursday’s final presidential debate.

When asked what he would say to Americans who think the president’s past critiques of the Black Lives Matter movement and professional athletes who express their first amendment rights contributes to a climate of hate and racial strife, Trump responded by claiming he’s “the least racist person in the room.”

“I think I have great relationships with all people,” Trump said. “I am the least racist person in the room.” He went on to stress the statement two more times.

Trump says children separated from parents at the border "are so well taken care of."#Debates2020 pic.twitter.com/Xs9MDQhaW7

Biden responded by alluding to Trump previously claiming to have done more for Black people than any other president except Abraham Lincoln.

“Abraham Lincoln here is one of the most racist presidents we’ve had in modern history,” the former vice president said in regards to Trump. “He pours fuel on every racist fire.”

“He’s made everything worse across the board,” Biden added, before referencing the first debate when Trump refused to disavow white nationalist groups. “He says about the Poor Boys, last time we we’re on stage here, he said, ‘I told them to stand down and stand ready.’ Come on, this guy has a dog whistle as big as a fog horn.” 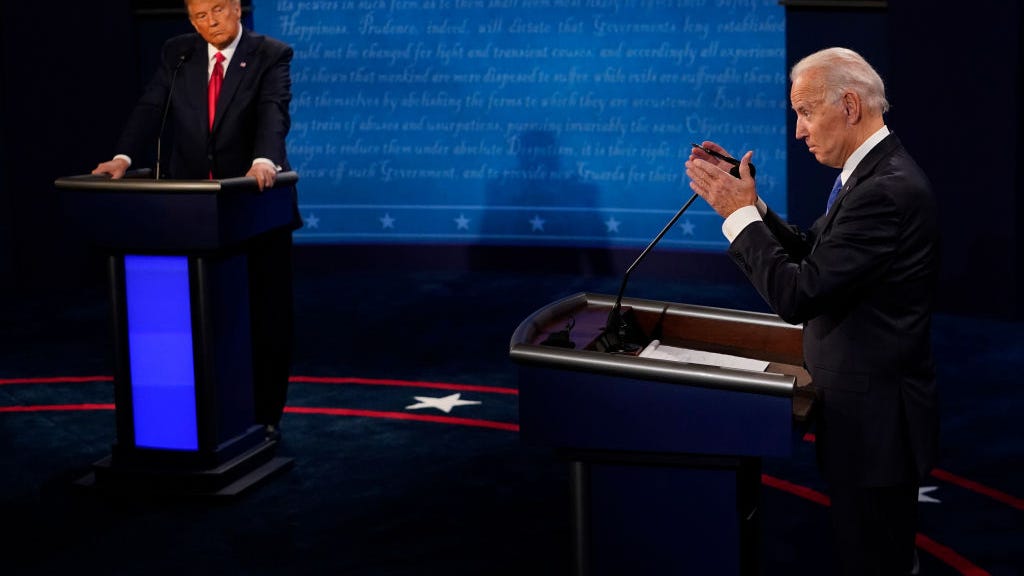 Biden slams Trump's COVID response: 'People are learning to die with it'

Trump responded by criticizing Biden’s crime bill in the ‘90s which is often blamed for overly criminalizing Black Americans. Biden went on to admit the crime bill was a mistake.

The final debate took place in Nashville, Tennessee at Belmont University and began with muted mics during each candidate's two minute opening remarks.

NBC’s Kristen Welker moderated the evening and received high marks for being able to maintain order for most of the debate.

Prior to arriving at the debate stage, both Trump and Biden tested negative for coronavirus on Thursday.

Following their test results and after consulting with Dr. Anthony Fauci, the Commission on Presidential Debates decided plexiglass barriers between the two candidates would not be necessary.