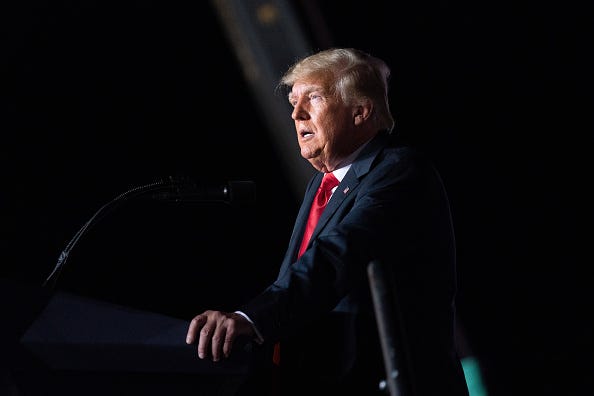 President Donald Trump left an interview with National Public Radio early after he was questioned by the interviewer on his claims that the election was rigged.

NPR reported that the interview was scheduled for 15 minutes and was the first the former president had done with the news organization after declining interviews for six years.

On Tuesday, Trump called in from his home in Florida to discuss several topics like the 2020 election and COVID-19 vaccines.

Trump's administration oversaw the development of the COVID-19 vaccines, and while he recommends people get them, he said he is not for mandating they do so.

In fact, the former president said the mandates are doing more harm than good.

He went on to say that he does support the vaccines, but he thinks it "has to be an individual choice" to get vaccinated.

The Supreme Court is currently looking into whether or not President Joe Biden's vaccine-or-test mandate for large employers will be allowed to go through. Trump has continued to be a prominent name in the Republican party since he left office. In the interview with NPR, he blamed Senate Republican Leader Mitch McConnell for senators who spoke out and refuted his claims the election was "stolen."

Trump was then pressed on his claims, and he continued with his narrative that the election was stolen and claimed that there was evidence of fraud.

NPR went on to ask Trump about the statements made by judges he appointed who claimed that there was no fraud found in the election. They even asked about Rudy Giuliani, Trump's lawyer, who said, "This is not a fraud case."

Trump responded, saying it was too early to talk about fraud when excusing why Giuliani said what he did on Nov. 18, 2020.

NPR continued to press the former president on his claims to which he continued to give excuses that have not been proven.

When asked about the attack on the Capitol because of his election claims, Trump "hurried off the phone" and cut the interview short, NPR reported.