By Maya Rajamani
Updated on

President Donald Trump said from the hospital Saturday night that he was "starting to feel good" but that "the real test" would be in the next few days as he continues to battle COVID-19.

“I just want to tell you that I’m starting to feel good,” he said. “You don’t know over the next period of a few days. I guess that’s the real test. So, we’ll be seeing what happens over those next couple of days.”

The president also gave an update on first lady Melania Trump, who has COVID-19 as well.

Earlier on Saturday, doctors gave an update on Trump’s condition at Maryland's Walter Reed Medical Center, saying he is "doing very well," but a source told White House reporters that, "we’re still not on a clear path to a full recovery" and that "the next 48 hours will be critical."

“At this time, the team and I are extremely happy with the progress the president has made. On Thursday he had a mild cough with some nasal condition and fatigue all of which are now resolving and improving,” Conley said.

“We are monitoring him very closely for any evidence of complications from either the coronavirus illness or the therapies we are prescribing to make him better,” Dr. Sean Dooley said. “We have monitored his cardiac function, his kidney function, his liver function, all of those are normal. And the president this morning is not on oxygen, not having difficulty breathing or walking around the White House medical unit upstairs.”

“He’s in exceptionally good spirits, and in fact as we were completing our multidisciplinary rounds this morning the quote he left us with was, ‘I feel like I could walk out of here today.’ And that was a very encouraging comment from the president,” Dooley said.

“Thursday no oxygen. None at this moment. And yesterday with the team, while we were all here, he was not on oxygen,” he said.

A source told the AP that Trump was administered supplemental oxygen at the White House on Friday before going to the hospital.

Meanwhile, a source familiar with the Trump’s health told White House reporters: “The president’s vitals over the last 24 hours were very concerning and the next 48 hours will be critical in terms of his care. We’re still not on a clear path to a full recovery.”

Conley said the president was first diagnosed with COVID-19 on Thursday evening and received Regeneron’s experimental antibody cocktail on Friday.

Conley also noted that in many cases, COVID-19 can become more dangerous as the body responds: “The first week of COVID, and in particular day seven to 10, are the most critical in determining the likely course of this illness.”

He said the president had a fever Thursday into Friday but hasn’t had one since Friday morning.

"He had a little cough. He had the fever. More than anything, he's felt rundown," Conley said.

Conley said he didn’t want to put a hard date on when the president may be released from the hospital. He said if the president needs all five days of Remdesivir treatment, he may stay at Walter Reed for the full course of treatment but it's unclear if that will be the case.

Melania Trump also tested positive and has said she has mild symptoms.

“The first lady’s doing great," Conley said Saturday. "She has no indication for hospitalization advanced therapy. She’s convalescing at home."

Trump tweeted Saturday that he was "feeling well" thanks to the "amazing" staff at the hospital.

"Doctors, Nurses and ALL at the GREAT Walter Reed Medical Center, and others from likewise incredible institutions who have joined them, are AMAZING!!!" he wrote. "Tremendous progress has been made over the last 6 months in fighting this PLAGUE. With their help, I am feeling well!"

Doctors, Nurses and ALL at the GREAT Walter Reed Medical Center, and others from likewise incredible institutions who have joined them, are AMAZING!!!Tremendous progress has been made over the last 6 months in fighting this PLAGUE. With their help, I am feeling well!

On Friday night, Trump tweeted from the hospital: "Going welI, I think! Thank you to all. LOVE!!!"

Conley said Friday that Trump had begun Remdesivir treatment. He wrote that the president "is doing very well. He is not requiring supplemental oxygen, but in consultation with specialists we have elected to initiate Remdesivir. He completed his first dose and is resting comfortably."

Trump was transferred Friday evening to Walter Reed “out of an abundance of caution” after testing positive for COVID-19, White House press secretary Kayleigh McEnany said.

The president, who was wearing a mask, gave a thumbs up to reporters as he walked from the White House to a Marine One helicopter bound for Walter Reed around 6:20 p.m. on Friday, photos show. 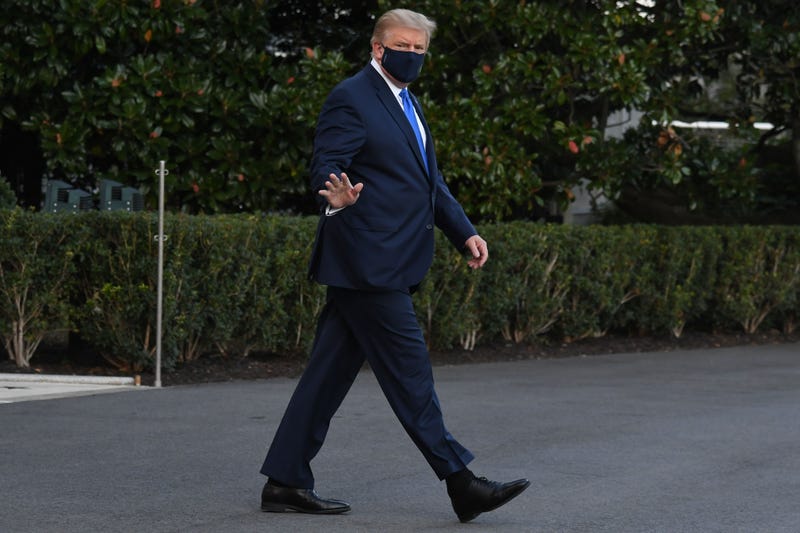 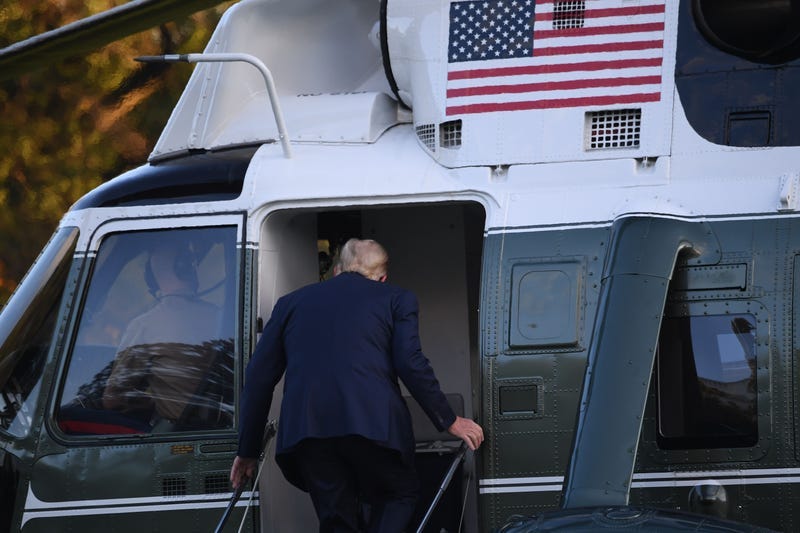 In a video message posted to Twitter moments later, Trump said he was "doing very well."

“I want to thank everybody for the tremendous support," he said in the video. "I’m going to Walter Reed Hospital. I think I’m doing very well, but we’re going to make sure that things work out. The First Lady is doing very well. So thank you very much, I appreciate it. I will never forget it.”

“President Trump remains in good spirits, has mild symptoms and has been working throughout the day,” McEnany said in a statement, noting that he would "work from the presidential offices at Walter Reed for the next few days."

“President Trump appreciates the outpouring of support for both he and the First Lady,” she added.

Conley said Friday afternoon that Trump was "fatigued but in good spirits.”

Trump “received a single 8 gram dose of Regeneron’s polyclonal antibody cocktail” and “completed the infusion without incident,” he said. The “cocktail” is an “experimental” treatment, the Associated Press reported.

Trump announced early Friday morning that he and the first lady had tested positive for coronavirus.

Tonight, @FLOTUS and I tested positive for COVID-19. We will begin our quarantine and recovery process immediately. We will get through this TOGETHER!

Other top advisers and allies of the president have also tested positive for COVID on Friday. Among them were former White House counselor Kellyanne Conway and Trump campaign manager Bill Stepien.